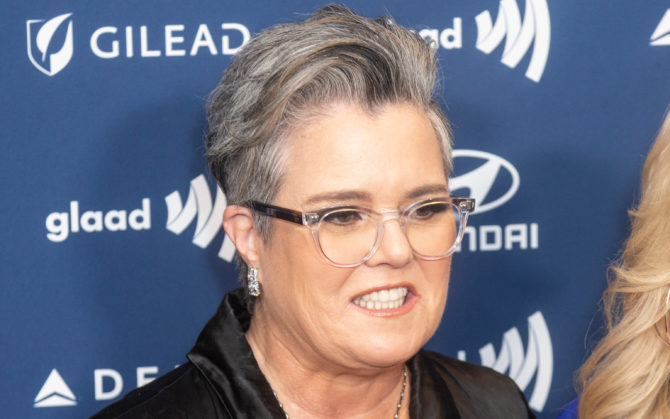 Rosie O’Donnell has talked about her time on The View in the past, but never quite like this.

In a wide-ranging interview on the Hot Takes & Deep Dives podcast, the funny lady spilled all kinds of tea about the hit morning show, its executive producer, and that crazy blowout she had with homophobe Elisabeth Hasselbeck, who she implies wasn’t the brightest bulb in the bunch.

According to Rosie, Hasselbeck was spoon fed a lot of the crazy B.S. she spewed by Bill Geddie, who served as the show’s executive producer from 1997 to 2014, when he was forced out following Barbara Walters’ retirement.

“She had Bill Geddie, who I don’t think is very pro-feminist, pro-women, he is the opposite,” Rosie said.

“He and I did not get along. And that was very obvious. He was afraid I was going to have him fired. I had no interest in taking that job. I just wanted it to be a better show.”

Rosie then went on to recall how Geddie, who frequently clashed with the show’s more liberal co-hosts, would give Hasselbeck conservative talking points and counterpoints to use against the other women on air.

“I know he did it every single day,” she said. “He would go into our dressing room and talk to her about what the Republican talking points were for that day.”

“So how I came to do it was I would get the Republican talking points and I would look. So I would be prepared on what she was going to say, you know?”

The two women constantly butted heads. And it seemed, at times, like they downright hated each other. But Rosie says she really tried to build a friendship with Hasselbeck, despite her nastiness and extreme antigay views.

“She’s an interesting person,” Rosie said. “I tried, no matter what, to love her. I took her kids to Sesame Street and I took her to her first Broadway show. And, you know, I don’t really know what she’s about.”

As for where they stand today, Rosie said she truly tried to “get over our differences” but “we never did,” in large part because Hasselbeck simply wasn’t interested.

Then in 2019, she insinuated Rosie was a sexual predator after Rosie said she had a “crush” on her in an interview.

Related: Elisabeth Hasselbeck ‘immediately started praying’ when she heard Rosie had a crush on her

“When she took the quote about me having a crush on her saying it was like if a man had a crush on her, I’m like, oh, dear god,” Rosie recalled. “That was not the intent nor the way she took it. And she knows it, which is the bottom line. She knows it.”

She added, “I said something that I had a crush on her, but it was not a sexualized crush. It was just like a girl crush like she was the MVP of a Division one softball team.”

“She was a cute little girl, you know, but I was in no way predatory wanting her or sexualizing it. I was just showing myself, love can win.”