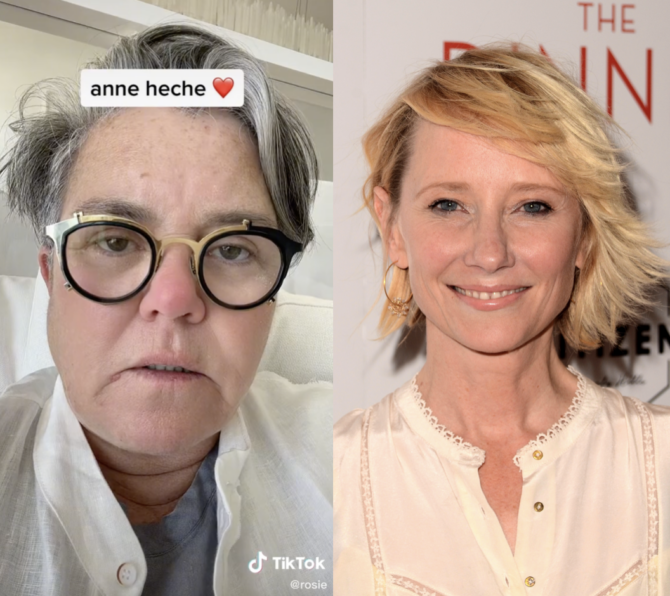 Rosie O’Donnell appears to be having an especially hard time coming to terms with the tragic passing of actress Anne Heche, who was taken off life support last weekend after suffering an anoxic brain injury during a single car crash on August 8.

In a TikTok video posted shortly after Heche’s death was announced, the former talk show host appeared visibly upset as she talked about her plans to take a closer look at Heche’s body of work, which included the ’90s blockbusters Six Days, Seven Nights, Volcano, and I Know What You Did Last Summer, just to name a few.

Related: Anne Heche gave us goosebumps—and proved she could do it all—in this classic ’90s teen slasher

“I’m about to watch that Anne Heche movie with Vince Vaughn [Return to Paradise],” she said. “That’s where I first really saw her and came to notice her. And she was a wonderful actress, she really was.”

all the feelings #anneheche

Rosie went on to call Heche’s death “very disturbing,” then said, “I just got her book, which I never read before. Wish I had, but I’m gonna read her book.”

“You know, fame is a strange thing,” she mused. “As Boy George says, fame is the impending, glittering disaster. It changes everything—the equilibrium, the balance in your life. Forever, I think.”

“May she find peace now, right? Go watch one of her movies. Lift her up. Very sad.”

Unfortunately, Rosie’s relationship with Heche wasn’t exactly positive, despite the fact that the two women moved in the same social circle during the apexes of their careers.

On a June 2021 episode of her podcast Better Together, Heche talked about her whirlwind romance with Ellen DeGeneres and an awkward encounter she had with Rosie prior to taping an appearance on The Rosie O’Donnell Show in the late ’90s.

“I was promoting, I think, Donnie Brasco, and I went on the Rosie O’Donnell Show…” she recalled. “So when I was in my dressing room … I got a knock on the door and Rosie comes in and sets herself down uncomfortably in front of me and basically states, ‘Let me cut to the point. If you bring up the fact that you and Ellen are a couple, I will not promote you. We will erase this episode.”

Related: Anne Heche’s final public words on her relationship with Ellen: “That was my Cinderella story”

“Now, that was a long time ago and that was Rosie O’Donnell,” Heche continued. She then noted that Rosie is “openly gay now; she was not then. And I do have to say, no one at that time stood by Ellen’s side. I’m proud to have been the person to do it, because she certainly didn’t have support. And for that I feel compassion.”

Earlier this week, Rosie took to her social media pages to share a clip from Heche’s appearance on her show, which she timestamped as having taken place in June 1998. In the video, the actress spoke openly about her then-partner DeGeneres.

“Ellen and I just bought a house this year, which was so amazing that through this year we’ve found our foundation,” she said.

When Rosie mentioned that Heche had been through “sort of a big, rocky year,” she replied, “We had a big year. It was rocky in the press, it wasn’t rocky for us. But it was kind of rocky the way the world was digesting our relationship. Now I think it’s at a place where I think people celebrating it, which I think is so lovely.”

When one of Rosie’s followers asked in the comments whether she had seen Heche’s June 2021 podcast episode, the funny lady said she had and that she was “shocked.” When another person noted that Heche is no longer here to offer her side of the story, Rosie replied: “well [that’s] my side.”

Two days after Heche’s crash, Rosie posted another TikTok video admitting that she felt badly about making fun of her in the past.

“So I can’t stop thinking about this Anne Heche accident and how horrifying the whole thing is,” she said, “and feeling bad that I made fun of her when she was talking to Barbara Walters about having a relationship with space aliens.”

In 2001, Heche appeared on 20/20 to promote her memoir Call Me Crazy. During the interview, she talked about being molested by her father as a child, which she coped with by escaping into a fantasy world on another planet.

“I’m not crazy,” Heche told Walters. “But it’s a crazy life. I was raised in a crazy family and it took 31 years to get the crazy out of me.”

Call Me Crazy is no longer in print and is not available as an ebook, so fans of Heche have been rushing to online bookstores and local libraries in search of the title. Used copies currently range from $100-$700 online.