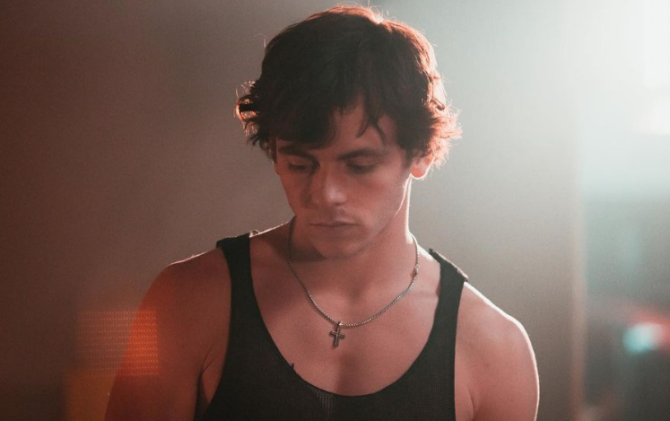 Earlier this month, the collective Internet lost it over a TikTok of actor/musician Ross Lynch singing with his band, The Driver Era, at a recent live show. But get this: He was shirtless!

“Singing while shirtless?,” you might exclaim. Yes, it can be done, as Lynch so proved in the video clip that thoroughly had thirst meters reading off the charts.

Well, now the former Chilling Adventures Of Sabrina star is adding one more talent to his multi-hyphenate status: The man can sing shirtless… while draped in a Pride flag! What can’t he do?

[VIDEO] @RossLynch draping himself with the pride flag in Salt Lake City, Utah – August 23 ? (via abigalemlove on Instagram) pic.twitter.com/ITemkQZH2X

While that initial video seems to have awoken a newfound appreciation for Lynch across the wider population, the latest feels like it’s exclusively for the queers, and for that we are thankful. Sure, the actor is currently linked to his former Sabrina co-star Jaz Sinclair, but that doesn’t mean we’re not thrilled to see him sporting a Pride flag and gallivanting across the stage like a true ally!

The clip comes courtesy of  Instagram user @abigalemlove, who happened to have a center-stage spot at the recent The Driver Era (Ross and his brother Rocky Lynch’s band) show in Salt Lake City, UT. Somehow not completely distracted by the display of gorgeousness and allyship in front of them, they captured the video—a public service—which is now making the rounds on Twitter thanks to the Ross Lynch stan account, aptly handle’d @DailyRoss.

Related: Former Disney star sings in his underwear — but no one’s listening to his voice

And, thanks to another dutiful concert-goer/Twitter user, we now have a wider shot, which confirms Lynch wrapped himself in the flag after it was thrown on stage by a fan during a performance of the song “A Kiss.” This video also confirms, as suspected, that Lynch was already shirtless.

Someone threw the flag at him last night. I was there! Unfortunately I wasn’t able to get as close as the other person. A kiss was the last song of the night 😄 pic.twitter.com/3kg9sK7xh3

The videos have inspired yet another wave of thirst for Lynch online, which—we have to presume—has only helped sell tickets to The Driver Era’s current tour. The chance to see the hunky singer swatched in a Pride flag? Worth the price of admission alone!

me at the ross lynch concert when he doesnt immediately take his shirt off pic.twitter.com/olEtvS2Lxg

oooooo i know the people in utah was shaking in their boots ?? shirtless and a pride flag whew https://t.co/BOSmTAGS4M pic.twitter.com/Arw3Qb09on

i think it’s toxic to create the idea of the “perfect man”. now that being said every man should aspire to be a carbon copy of ross lynch

And, while you’re here, we just want to remind you that Lynch was actually pretty darn great in the film My Friend Dahmer, playing the infamous serial killer in his teens. Obviously its a tense, unnerving watch, but well worth seeking out. Or, if that’s not your speed,  Disney Channel’s meta Teen Beach Movie and its sequel are actually really fun, and Lynch is a blast in them. Just covering all of our bases here—check them out!