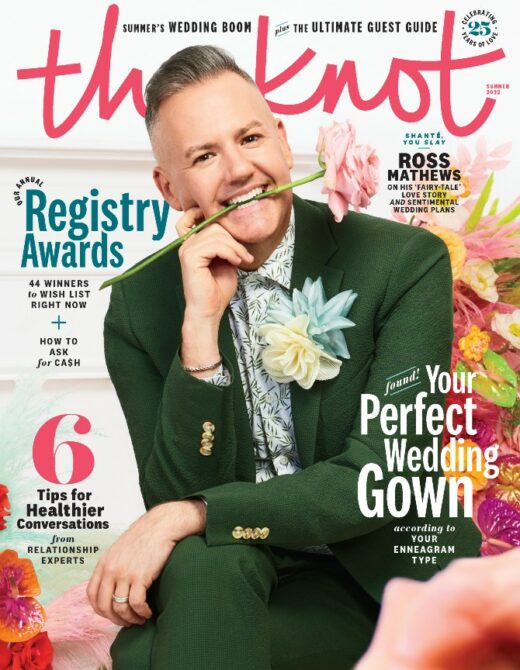 TV host Ross Mathews graces the cover of the summer 2022 wedding magazine The Knot. He follows in the footsteps of Jonathan Bennett and Jaymes Vaughan, who made history last year as the first gay couple to feature on the cover.

Inside the magazine, Mathews and fiancé, Wellinthon Garcia, talk exclusively about how they met, the beginning of their romance during the early months of the pandemic, and upcoming plans for their dream wedding.

The two men plan to marry later this year in Mexico, although have not yet revealed a date.

Mathews, 42, first came to attention as an intern and a correspondent for The Tonight Show with Jay Leno. He later became a regular judge on RuPaul’s Drag Race and more recently landed a co-hosting gig on The Drew Barrymore Show. He met Garcia, who works in education, whilst on a vacation to Puerto Vallarta in Mexico.

Mathews spotted him by the hotel pool one morning and sauntered over to introduce himself, saying, “Hi, I’m Ross Mathews.” Garcia had no idea who he was, so simply replied, “Hi, I’m Dr. Wellinthon Garcia.”

Soon after meeting, their budding romance was hit by the Covid pandemic. Mathews was based in Palm Springs and Garcia, who was born in the Dominican Republic, was in New York.

“Everything shut down,” recalls Mathews. “We went from March until almost August without seeing each other. We dated over Zoom and FaceTime. We put the effort in: We’d do Taco Tuesdays or watch the same movie and be like, ‘3-2-1-play.’ We would find different ways to go on dates. In a way, it actually forced us to have deep conversations and get to know each other in a way that we wouldn’t have if we were just, you know, hitting it.”

Love blossomed, helped in no small part by Drew Barrymore. She invited Mathews to guest on her talk show. It went well, so the producers asked him to come back. Before he knew it, he’d landed the job as co-host in New York City, meaning he and Garcia were able to get an apartment together in the city.

“I don’t know that we would have been on such a fast trajectory if Drew hadn’t given me work in New York.”

“My mom actually got to meet Ross,” recalls Garcia. “I’m glad my mom got to interact with him. Her approval of Ross meant the world.”

Their upcoming wedding will have around 100 guests. Although taking place in Mexico, it will have some US vibes.

Mathews announced his engagement on The Drew Barrymore Show. He believes it’s important to step up as a role model.

“We don’t need any more attention. Wellinthon doesn’t seek it—he’s an educator. But we chose, purposefully, to talk about our wedding because we didn’t have that example growing up. So if we can, by announcing our engagement on The Drew Barrymore Show or sharing our love story on the cover of The Knot? These are mainstream [outlets]. We know there will be kids out there who look at this and see it as perfectly wonderful. Screw normal! Wonderful.”

Read the full interview in the summer issue of The Knot, available on newstands April 26th.