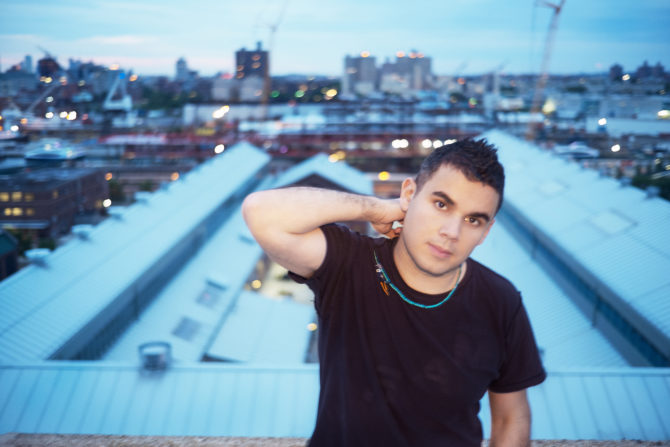 In some ways, Rostam Batmanglij’s new album has been years in the making. The Vampire Weekend alum released his first solo single, “Wood,” way back in 2011. Between that release and his solo debut Half-Light, out this Friday, he worked on a third Vampire Weekend album before parting ways with the band, and produced tracks for Carly Rae Jepsen, Charli XCX, Frank Ocean and Solange, among others. But with Half-Light, the time has come for Batmanglij to release music in his own voice—both literally and figuratively—and from his perspective as a gay Iranian-American. The L.A.-based Batmanglij called Queerty from West Hollywood last month, just an hour after the total eclipse to talk about going solo and how his identity informs his music.

Where did you watch the eclipse?
Just kinda walkin’ around—a friend’s house in West Hollywood, actually.

Well, you’ve talked a bit about dusk and dawn being a theme on Half-Light, and that made me wonder if you think the album would have made a good eclipse soundtrack.
Yeah. [Laughs] I’m not against that idea.

So why Rostam? Why not “Boys Like Us”?
I felt like I was putting some kind of a layer, almost some kind of protective space between me and the music that I made. I thought that, you know, there’s something good about having a direct connection to your songs through your name. I don’t know if protection is the right word. Just like a layer of glass or sort of a distance.

Why do you think you were trying to create that distance?
I guess I liked that name for what it could mean on a number of levels. But I don’t know. There’s definitely advantages to having a project where you don’t make it clear whether it’s one person or multiple people behind the project.

It’s interesting, I was once at a dinner party and this yoga instructor asked me my name. And when I told her my name was Rostam, she laughed and she said, “There’s this band that I love called Rostam and I play one of their songs in all of my yoga classes.” I was like, “Is the song called ‘Wood’?” And she was like, “Yeah! I love that band!” I was like, “That’s me.” [Laughs] She kinda couldn’t believe that at first. She was like, “No, it’s a band!”

How did you convince her that it was you?
[Laughs] There were some other people at the dinner party who were like, “He’s not lying.”

Why go solo now? Was there anything in particular that precipitated that move?
I’ve always made music in different context. If you’ve followed the different music that I’ve made, then I don’t think it’s surprising that I would make this record as just Rostam. In fact, a lot of people were asking me on Twitter or in the real world, When will there be a Rostam record? And it was something that I’d been working on, on-and-off for as long as I’ve had a career in music. So, in some ways it was really about finishing it and putting out the album.

Yeah, a few of the tracks on Half-Light date back to 2011.
Yeah, I released “Wood” on Soundcloud in 2011, and I released it officially on all the music services a year ago. And I’ve also made music under different names. My friend Wes [Miles of Ra Ra Riot] made an album as Discovery that came out in 2009.

Is it daunting at all being front and center on this project? Like, it’s all on you.
I don’t think it’s daunting, but it’s something I didn’t want to do unless I was telling a complete narrative, in terms of songwriting. Songwriting is something I think about a lot, and I feel like at this point I have certain goals that I want to attempt to accomplish in songwriting. So I think it’s always been equally daunting for me to try to take on those goals. And this album is a personal album, so it felt like it was one that I felt like I had to make. I couldn’t imagine it coming out in any other context.

Is there stuff on this album that you felt you couldn’t address as part of a band? Stuff that had to be in your own voice?
Well, on the first two Vampire Weekend albums, Ezra [Koenig] and I collaborated on lyrics on a handful of songs. On the third record, not so much. On the third record, the music was often my responsibility, but the lyrical narrative was Ezra’s. So, I think making this record was a challenge to me, but it was also kind of a very natural endeavor.

So, what is the narrative on Half-Light?
[Laughs] I can’t really answer that question. I feel like different songs address different things. But they feel connected to one another.

Ok, well, what can you tell me about the song “When”?
Well, there’s two parts to the song: there’s a sung part and a spoken word section. And the sung part was something that I wrote a long time ago. Then as I was getting close to finishing this record, I felt that that wasn’t really enough of a song. I felt like I wasn’t telling the whole story. So I started this voice memo of the spoken word thing. It was really just mumbling at first. I remember listening to that voice memo on an airplane and the lyrics kinda pouring out of me. And the way that I saw the lyrics as I wrote them for the spoken word section was as different voices at a protest, and all of the voices my own. That’s kinda how I imagined what was going on in the world of that song.

Yeah, that was one of the more overtly political songs on the album. You’re queer, you’re Iranian-American, you’re the child of refugees. What is it even like in your head day-to-day living in “Trump’s America”?
It’s an important question to ask, but I want to say that maybe it’s a question that a lot of children of immigrants, people that don’t identify as white—what it’s like to live in America is something that we’ve been wrestling with our whole lives. It is true that since the election certain groups have been made to feel less safe. That’s 100 percent true. But I think something like white supremacy—that’s been an aspect of American society since the beginning of America. America was founded on white supremacy. White supremacy is woven into the DNA of every part of America actually. Yes, there are people gathering together at rallies in the name of white supremacy, but white supremacy is a part of the air that we breathe in America. I think there’s a lot of people that are able to live in denial of that, and I have never felt like I could live in denial of that, knowing what I do about American history.

Is that affecting your music and your lyrics?
Yeah, definitely. My work is definitely informed by my identity which is that of someone who does not identify as straight, does not identify as white, does identify as American, has conflicted feelings about what that means, and I guess I feel like it’s important to talk about those things in ways that are not always obvious. I think that’s really what brings about social change. If you can get someone to listen to a song and fall in love with that song, and when they find out what it’s about they’re like, “Hold on a second. I don’t know if I agree with these politics.” Maybe they’ve already fallen in love with the song and it’s too late. They can’t escape their feelings.

I want to ask you about the chorus on “Bike Dream”: “Two boys one to kiss your neck / And one to bring you breakfast.” Is that about a non-monogamous relationship?
It’s not. [Laughs] I understand why people might think that. For me, what that really was pointing to was a situation where you want somebody that you’re with to be two different kinds of people. Like, two different kinds of boyfriend. And also it’s about when somebody wants you to be two different kinds of people. It’s about what we deal with in our live, those of us who don’t identify as straight. The ways in which sometimes we benefit from passing as straight, and sometimes we desire to have a relationship with somebody who can pass as straight, but also somebody who can’t. That was one of the things that was on my mind at the time. It’s not all the song is about, but it’s one of the things it was about.

I get that songs don’t always have, like, one specific meaning. Does it get frustrating when people ask you, “What’s this song about?”
Yeah. Definitely there are specific situations and specific people that inspired the song. But I feel like it’s limiting to say that a song is about any one thing.

Let’s talk about your cameo in Charli XCX’s video for “Boys”. Did you get to decide what you’d be doing in the video?
Yes, I did get to decide what my activity was. Charli is a close friend and she sent me the treatment for the video. I can’t remember if I had just recently dyed my hair blond. I had never dyed my hair previously. I thought it would be cool to have it cut in a mohawk, because you’d get to see the different colors at once and see that happening in real time.