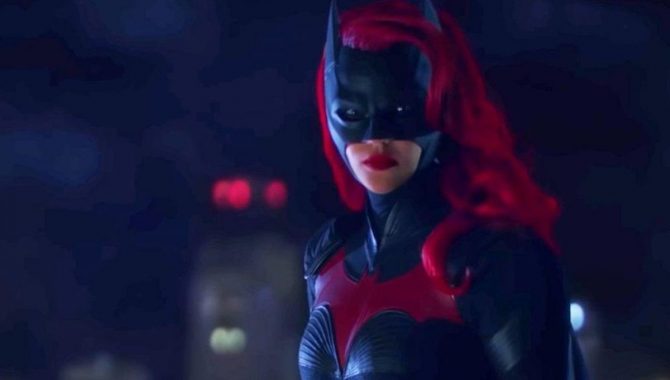 Actress Ruby Rose has publicly slammed producers of the series Batwoman, alleging reckless endangerment of cast and crew and vindictive behavior. She also alleges that contrary to official statements, she was fired from the show.

Rose took to Instagram Stories to share her words, much to the shock of fans. “Enough is Enough. I will come for you so what happened to me never happens to another person again,” Rose wrote, tagging Batwoman showrunner Caroline Dries, executive producers Greg Berlanti and Sarah Schechter and The CW. “And so I can finally take back my life and the truth. Shame on you.”

Rose then goes on to accuse Warner Bros. TV Chairman Peter Roth of sexually harassing women on set, and of hiring a private investigator to have Rose tailed. “There’s already an army waiting for you,” Rose writes. 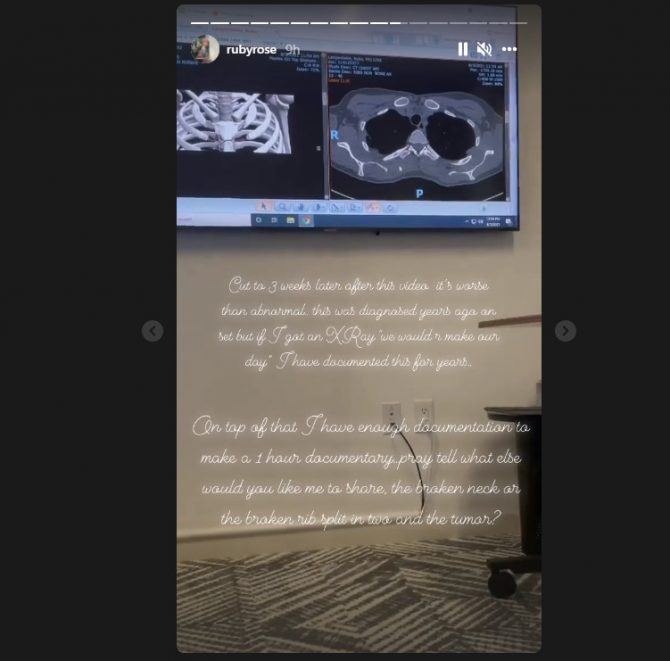 The actress then shares video images of injuries she suffered from a stunt on the show gone wrong, which nearly left her paralyzed. In a more shocking twist, Rose now alleges that she also suffered a fractured rib, a broken neck and that doctors had also diagnosed her with a tumor. She further claims that Roth forced her to return to work just 10 days after major surgery, “or the whole crew and cast would be fired and I’d let everyone down because [then WB Television Group head] Peter Roth said he wouldn’t recast and I just lost the studio millions (by getting injured on his set).”

Rose then goes on to claim that Warner Bros. pressured her to make the announcement she was leaving the show and also forced her to cancel a planned appearance at Comic-Con. Executives told her to “cover your scar, we don’t want to see that scar,” referring to her surgical scars resulting from her on-set injuries.

In sum, Rose declares “To my dear, dear fans still asking if I will return to that awful show, I wouldn’t return for any amount of money nor if a gun were to my head … NOR DID I QUIT. I DID NOT QUIT, they ruined Kate Kane and they destroyed Batwoman, not me. I followed orders, and if I wanted to stay I was going to have to sign my rights away. Any threats, any bullying tactics or blackmail would not make me stand down.” 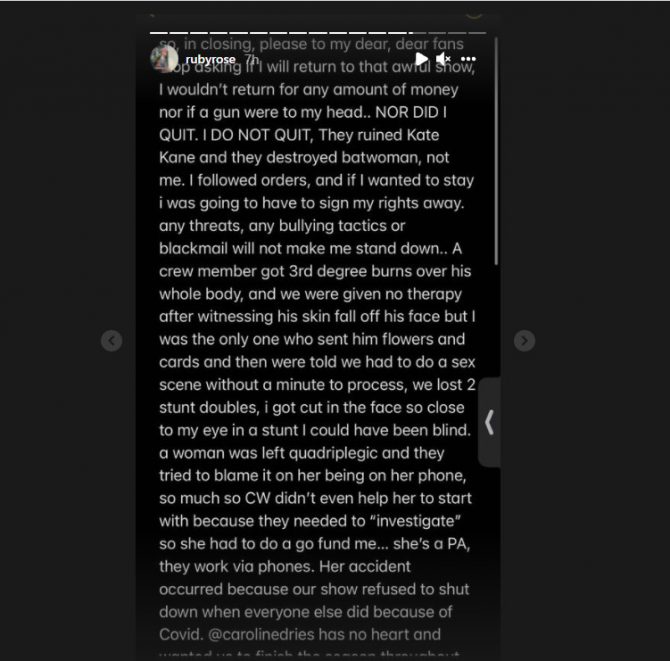 In the same statement, she also claims to have witnessed a crew member get 3rd-degree burns on set, a PA get paralyzed, two stunt doubles suffer serious injury, and that she also received a previously unreported cut that almost left her blind. Rose also claims that showrunner Caroline Dries refused to shut down the show due to COVID-19 despite other CW shows already suspending production, and that Dries seldom visited the set during filming. The government of Canada eventually ordered the show to shut down production. 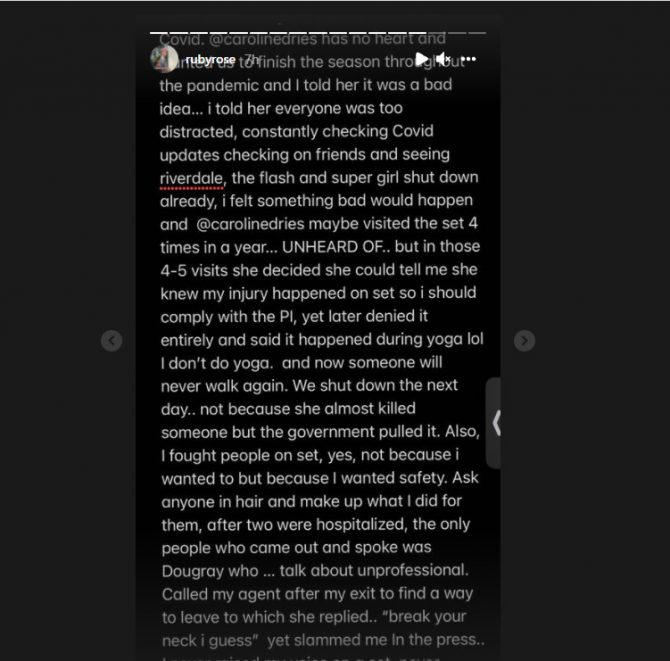 Rose also doesn’t hold back against former castmate Dougray Scott, whom she labels “unprofessional,” claims “abused women,” and in one disturbing incident injured a stuntwoman. Rose also claims Scott regularly was late to set, left without warning, and verbally abused the crew and his castmates.

Ruby Rose departed Batwoman between its first and second seasons amid reports of on set tensions and her extreme injuries. The show recast the role with actress Javica Leslie as a new Batwoman, Ryan Wilder, and recast the part of Kate Kane with actress Wallis Day. Day’s casting raised suspicions as to the bad blood between Rose and the producers of the show, as her character had undergone “extensive plastic surgery” to appear unrecognizable. The move essentially signaled that Rose would never be allowed back on the program.

Rose’s allegations also follow another superhero-related scandal at Warner Bros. earlier this year, with cast members of the film Justice League accusing replacement director Joss Whedon of harassment and racism on the set of the film, and further alleging that upper level executives for the studio tried to cover Whedon’s behavior up.