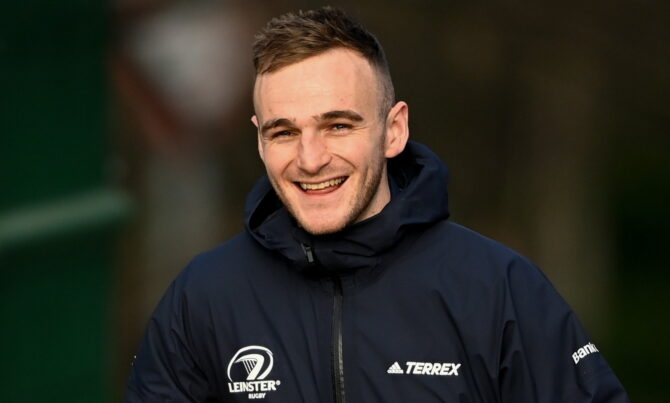 Leinster rugby star Nick McCarthy has officially shared his truth with the world.

Though born in the U.S., McCarthy has followed in his father’s footsteps of playing rugby for Ireland since his adolescence. However, the stress around the idea of coming out in the public eye had him thinking about leaving it all behind.

In his official coming out interview with the Leinster Rugby publication, McCarthy stated, “It affected me so much that I agonized over my future and contemplated walking away from rugby altogether because I just didn’t think I could come out while playing rugby.”

Related: 5 gay pro athletes who broke ground by coming out while still playing

Thankfully, he had his fellow team members to lean on. Though just now coming out to the public, McCarthy explained that he’d actually told his coaches late last year.

“I spoke to Leo (Cullen) and Stuart (Lancaster) last November, and the support that I got from them straight away was unbelievable. They helped and guided me over the months that followed so that I felt more comfortable to come out to the group.”

McCarthy went on to discuss some of the gay pioneers in athletics that helped inspire him to share his truth with his team and the world.

“Looking at Carl Nassib or Josh Cavallo coming out and Jack Dunne here in Leinster and how he spoke publicly last year about his bisexuality, has helped me a lot. I’ve had good conversations with each of them and they’ve been hugely encouraging.”

“In turn, I feel if I can now help others come out in professional sport or in their everyday lives and make being gay more normal and not a thing to be worried about, then that is a positive.”

McCarthy was apprehensive to tell his team, but when he finally addressed it to them this past January ahead of their scheduled team meeting, the reception was overwhelming.

“I only made a quick announcement. But I just remember the room erupting! They were all delighted for me and it was immediately a weight off my shoulders.”

With his brave admission, McCarthy himself has now joined that list of inspiration queer figures in athletics who will undoubtedly inspire others the way players like Nassib and Dunne inspired him.

Scroll down for more pics from McCarthy’s Instagram page…

baring it all
11 comments