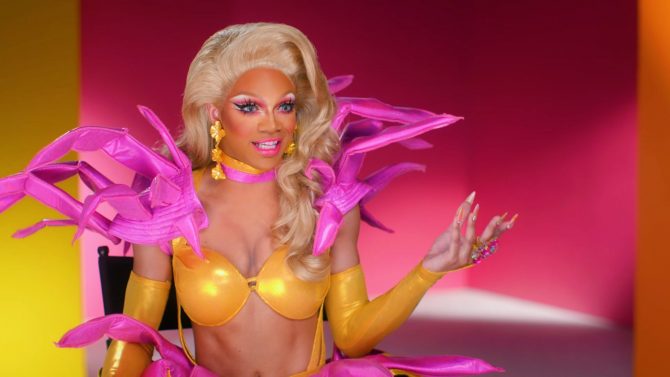 So says Mama Ru in the preview clip for this week’s episode of Drag Race, and as we anxiously await to find out what in the hell she’s talking about, we took some time to catch up with last week’s fallen queen, Kahanna Montrese.

After a hilarious-for-all-the-wrong-reasons stint in “Good God Girl, Get Out!”, Kahanna and fellow teammate Mercedes Iman Diamond wound up lip-syncing for their lives. By now we all know how that story played out.

We were finally able to track down Kahanna — a harder task than you might imagine — to get the tea on last week’s acting challenge, that runway wardrobe malfunction, and what it feels like to be a descendant of Drag Race royalty.

Hey girl! Let’s start from the beginning — how long have you been doing drag?

What sparked your interest in it?

To be honest, what made me interested in drag was having a creative outlet where I could perform. It is a great expression of creativity.

What kind of influence has your drag mother, Coco Montrese, had on the queen you’ve become?

Her professionalism, her stage presence, and I feel like the way she engages with fans. It’s an experience to watch her perform. She knows how to make it very personal.

You were worried about the role that you were given in “Good God Girl, Get Out!” Which role would you have preferred?

I wanted the dad role.

I felt like it was a really fun character that I felt suited me.

There was a big astrology element on the Main Stage in this episode — what qualities of your zodiac sign, Aries, do you identify with the most?

OK we’ve got to ask…Did you accidentally rip your dress on the main stage or was that a tear-away that was meant for later?

It was a tear away that was meant for later. I think I slipped on Scarlet’s bubbles!

Ohh you know that’s going to end up in some subreddit conspiracy thread now.

What do you wish you could have shown on Drag Race that we didn’t get to see?

I brought some really sickening drag and literally the Aries one was the worst one I had. I wish I had the chance to show some of those sickening looks.

Do you think you were given a fair shot to showcase yourself?

Yes. I feel like the simple fact that I was being offered two episodes was a huge opportunity.

If you could have picked the “Lip Sync for Your Life” song, what would you have picked?

“Independent Woman.” I would have turned that out!

I believe it. Your acrobatics during your lip syncs were incredible to watch! Where did you learn to tumble?

I used to do gymnastics and my cheer coach, Robert, was a huge part of my childhood. It was a creative outlet for me. I really had a lot of respect for him. Robert’s the one who helped me learn to express myself. Tumbling was a way for me to do that when I was younger.

There was some drama in the workroom this episode about Silky’s so-called “screen-time hogging?” What’s your take on that?

Honestly, I never felt like she hogged it. To me, because of Silky everyone warmed up and was able to talk more. She showed us why we were there. The personality and energy she brings to the show are much needed.

What have you learned from working in Vegas with Drag Race All-Stars like your drag mother Coco, Shannel, and Yara Sofia?

The biggest thing I got from that is the quick changes. We have to do so much it’s such a quick amount of time. You always got to put on. Always be ready no matter what situation you are in.

What’s next for Kahanna?

I’m focusing on music and putting out great content. I have so many things that I have worked on since the show that I am slowly putting out. I know I only had two episodes on the show but you have a lifetime of great drag coming.

Amen! Where can our readers find you in the mean time on social media?

All my socials are @kahannamontrese.