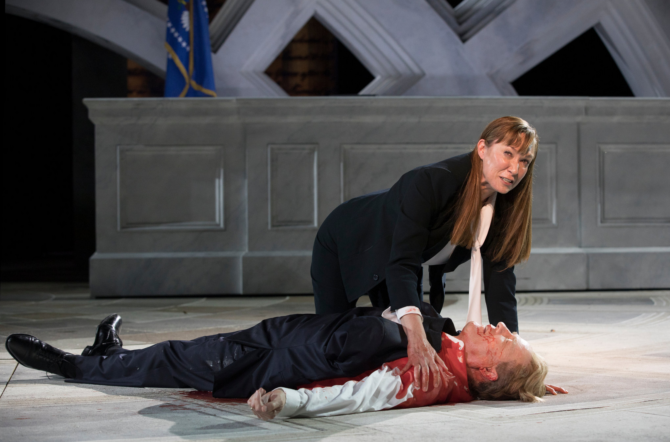 A small, rural theater company has recently found itself the target of some pretty vicious email attacks from people who are pissed off about a production of “Julius Caesar” featuring a Donald Trump lookalike who gets assassinated, South Coast Today reports.

For the past week, Shakespeare & Co in Lenox, MA has been inundated with threatening emails from Trump supporters over the production.

“Your play depicting the murder of our President is nothing but pure hatred,” one person wrote. “You are vial (sic) despicable excuses for human beings. I wish you all the worst possible life you could have and hope you all get sick and die.”

Another email read: “What exactly were you idiots thinking about producing a play that depicts the killing of our President? Does anyone over there have an ounce of morality, decency, and or common sense?”

The production people are mad about was staged by the Public Theater of New York, not Shakespeare & Co in Lenox. In fact, the two theater companies have no affiliation whatsoever, other than the fact that they both produce plays by Shakespeare and are geographically close to one another. Sort of. (They’re about 150 miles apart.)

The Public Theater of New York came under fire for the production earlier this month, resulting in Delta Air Lines and Bank of America pulling their sponsorship of the play, which closed last weekend.

“We have the Shakespeare.org domain name, so if you Google Shakespeare we’re pretty much at the top,” Burrows explains. “Several other Shakespeare theaters companies around the nation have reported receiving similar messages.”

In response to the emails, Shakespeare & Co has been sending a response informing people that they have the wrong theater and providing them with a link to a synopsis of “Julius Caesar.”

“Thank you for engaging us in conversation,” the letter states. “We support the arts and freedom of expression. We understand not everyone will agree with certain interpretations of music, art, dance, or drama, but that is where important debate can emerge.”

So far, Burrows says, no one has apologized for the mixup.

“It just speaks directly to the polarization there is in political discussion, and there is such a sadness to it,” he says, but “we’re thankful that Shakespeare is still a hot property because we’re feeding off that.”