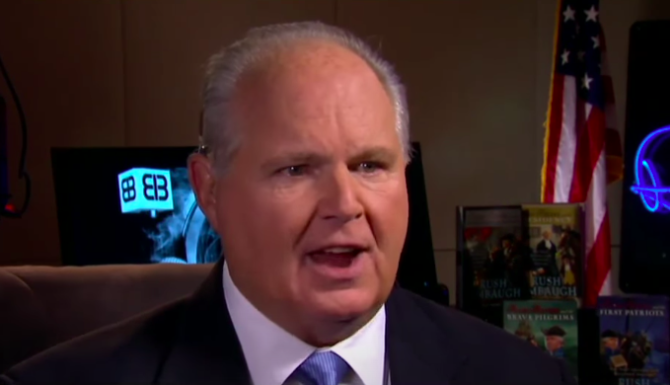 You’ve likely heard by now that conservative radio host Rush Limbaugh has died. Now, folx on Twitter are thinking back on his homophobic legacy, recalling when he used to give “AIDS Updates” on his radio show, during which he would purportedly list off the names of gay men who had died from the virus while playing disco music in the background.

I actually did not know until today that Rush Limbaugh had a segment called “AIDS Update” in which he celebrated gay deaths. what a horrible, execrable excuse for a human being. if anything, the jokes today are too kind.

Rush Limbaugh had a radio segment called “AIDS Update” where he’d read out the names of gay people who had died and celebrate with horns and bells.
So the whole “don’t speak ill of the dead” thing doesn’t apply to this absolute fucking monster.
Let him rot.

Rush Limbaugh used to give an "AIDS Update" on his show, celebrating the gay people who'd died of AIDS that day.

So no… it's not "liberal hypocrisy" to feel relieved that the world has one less homophobic bigot in it.#goodriddance

Understandably, not everyone could believe the story. It is pretty shocking, after all. Not to mention sad, disgusting, disturbing, shameful, and just plain mean.

So the good internet sleuths over at Snopes investigated the matter and, as it turns out, the “AIDS Update” segments really did happen.

While we have not uncovered any audio of these segments, we did find a few contemporaneous news articles and comments from Limbaugh confirming the contents of these controversial segments.

Iowa’s Cedar Gazette reported in 1990 that Limbaugh’s “AIDS Update,” a recurring segment in which he made jokes about a disease that had killed more than 100,000 people in the United States the previous decade, started by playing songs such as “Back in the Saddle Again,” “Kiss Him Goodbye,” “I Know I’ll Never Love This Way Again,” and “Looking for Love in All the Wrong Places.”

Here’s a screen grab from the Cedar Gazette’s 1990 report which features a quote from Limbaugh talking about his regular “AIDS Update” segment and the “militant homosexuals” who deserve everything they get:

According to Snopes, Limbaugh, who jokingly called AIDS the “Rock Hudson disease,” later regretted his “AIDS Update” segment after he realized it was “making fun of people who were dying long, painful and excruciating deaths.”

Earlier today, “Rush Limbaugh” was trending all morning on Twitter. But because the arc of the moral universe always bends toward justice, by this afternoon his name was bumped from the list of trending topics and replaced with “AIDS Update.”

We will refrain from making any further comment on his passing and instead leave you with this tweet:

on today's AIDS Update, PrEP continues to keep community transmission of HIV low, and Rush Limbaugh continues to be dead