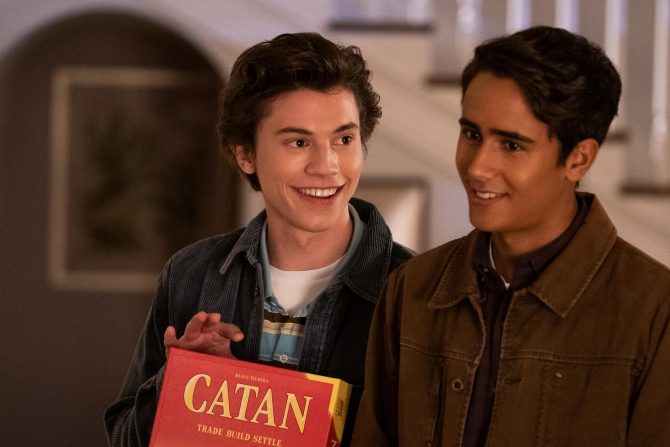 Russell T. Davies, the creator of the original British version of Queer as Folk, has lashed out at The Walt Disney Company over its moving the series Love, Victor from Disney+ to Hulu. Davies also says he fears for the future of queer content as entertainment companies become more monolithic.

Disney first announced Love, Victor, the sequel series to the popular film Love, Simon, would stream on the company’s new streaming service Disney+ when it debuted this year. The company then announced that the show would land on Hulu instead, after fears that its storylines might be too mature for the Disney+ brand. Creators Issac Aptaker and Elizabeth Berger, as well as showrunner Brian Tanen, ultimately praised the move, as it would allow them to tell Victor’s story without any fear of censorship.

For Davies, however, the move sets a frightening precedent. The writer/creator had harsh words for Disney, and what its treatment of Love, Victor could mean for future series.

“My great worry with huge monoliths like [Disney+] is it’s family orientated, it’s family-friendly,” he said while speaking at the Edinburgh TV Festival, reports PinkNews. “Disney is out to buy all of these companies and will keep buying them, and then, as a gay man, I’m sitting there going: ‘Well where is my content?’ When Disney+ launched they had 3,931 hours of entertainment, it took 23 weeks to watch; I could watch the gay content in half an hour and that’s really important to me and really scares me.”

“It had a series called Love, Victor, which is a television spin-off of the film Love, Simon, which is a gay series,” Davies said. “They moved it on to Hulu. They commissioned it and developed it, then they moved it. There’s a small sign there of what will happen once this free-for-all becomes great big monoliths, as it will.”

For the record, Disney+ does feature LGBTQ content in its programming, including a recent Pixar short film, as well as the much-promoted documentary Howard. Several films featured on the streaming service also feature incidental queer characters. The service does, however, try to maintain the Disney “brand” of family-friendly titles without graphic sex or violence.

We’re guessing Davies may not be aware that the fight to maintain the squeaky-clean Disney reputation is also nothing new. The company originally founded “spinoff” production companies Touchstone Pictures, Hollywood Pictures, and even later bought Miramax precisely to produce more adult-oriented content without damaging the Disney name. The company also still owns and produces Love, Victor despite the move to Hulu, and greenlit a second season of the show earlier this month.

In other words, Disney isn’t embarrassed by Love, Victor; it’s proud enough to keep producing it albeit on a service more oriented toward the show’s audience.

As showrunner Brian Tanen told Queerty: “Everyone at Disney, every executive, was a champion of not only the show but also what it was about. There were a lot of fans—themselves activists of this subject matter. I think Disney+ is a platform finding its brand and its voice. I, for one, feel that for the longevity of the show, that Hulu will allow us to tell more adult stories. We’ll be more able to grow up and have nuanced stories that will include not just first crushes, but also first sexual experiences.”

The cancellation of Love, Victor over its content would be cause for concern, and true marginalization of queer voices. Disney moving the show to Hulu, on the other hand, sends a message that larger companies are still committed to producing honest, mature, LGBTQ-themed content. That’s a cause to celebrate.

Season 2 of Love, Victor is now in the early stages, though an official production date has yet to be announced due to the COVID-19 pandemic.