Actor Russell Tovey has shared a sweet Instagram posting with Steve Brockman, indicating the two are clearly an item once again.

In the image, Tovey, 38, has his hand against Brockman’s chest. The short caption simply reads, “Boxing Slay.” December 26th is a public holiday known as ‘Boxing Day’ in the United Kingdom.

Brockman commented under the photo: “God ur fit @russelltovey x love you”.

Tovey responded with an heart-eyed emoji: “😍” 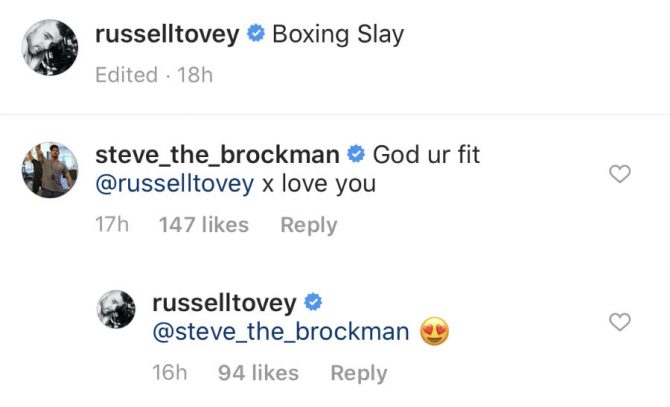 Tovey, who appeared in Looking, Quantico, and several UK TV shows, announced his engagement to fellow Brit, Brockman, in February 2018.

Brockman works as a fitness trainer and leader of boot camp vacations. He previously worked briefly as an adult entertainment performer for Randy Blue studios.

However, four months after announching the engagement, Tovey revealed on Instagram that the two men had split up.

Earlier this summer, it appeared that the two were together again after Tovey posted a photo of himself and his dogs lying on his bed. The photo was taken by Brockman, who commented, “My world.”

In September, they posted Instagram images vacationing in Sitges, Spain.

Just before Christmas, Brockman posted photos of the pair on a skiing holiday in Austria.

Whatever the exact nature of their relationship, here’s wishing them both a happy and prosperous 2020!