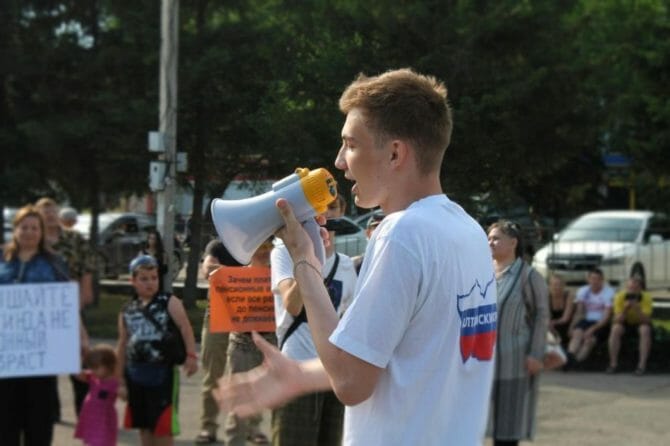 A Russian teenager has been found guilty of violating the country’s antigay child “propaganda” laws, making him the first minor to be targeted by the government.

16-year-old Maxim Neverov was found guilty this week of spreading “propaganda of homosexuality among minors” despite being a minor himself.

Neverov was slapped with a fine of 50,000 rubles ($770 U.S.) for posting a couple “partially nude” photos to Vkontakte, a Russian social media site.

Related: Here’s 7 reminders of all the anti-gay horrors in Russia that Trump just sanctioned

But there’s clearly more to the story.

Earlier this year, Neverov attempted to organize an anti-Putin street performance titled “Gays or Putin”. He submitted a dozen applications to the city administration for permission; all 12 applications were rejected. The case managed to get the attention of the local Duma.

According to Russian LGBT Network, an LGBTQ advocacy site, Neverov was arrested on July 24. At the time, he was denied access to a lawyer. As a result, he refused to speak to police.

Russian’s antigay “propaganda” law was signed into law by President Vladimir Putin after receiving unanimous approval by the State Duma in 2013.

It’s alleged purpose is to “protect” children from the influences of homosexuality by any means necessary.

The Commission did not provide a reason for their guilty verdict against Neverov. The teenager has since appealed the verdict.