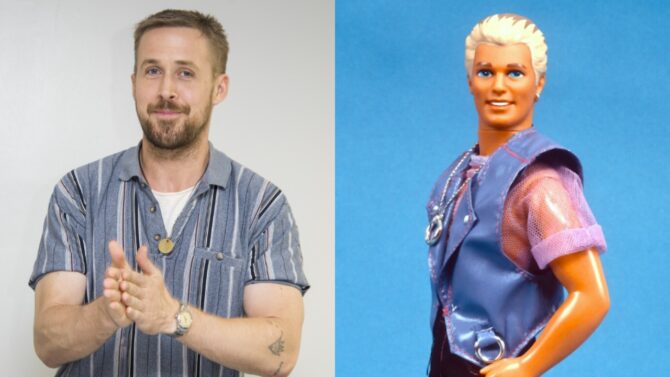 Warner Bros. shared a first look at the actor in full Ken Doll drag today, and it’s got us eager to hop in the pink corvette and take a trip to the Barbie Dreamhouse—take a look for yourself:

Honestly? It’s perfect. Yes, there’s the bronzed abs and the arms and the pecs, but Gosling’s also sporting the dead-on flirty smirk, the hair is so blonde it’s basically platinum, and that cool-guy denim vest is frayed at the ends just so. And we’re losing it over the monogrammed underwear—Ken so would—it’s almost enough to make you forget there’s absolutely nothing going on underneath!

This is only the second look we’ve been gifted from the long-gestating Barbie movie from writer-director Gerwig (co-written with her partner, filmmaker Noah Baumbach). With hot pinks and a plastic sheen, this feels like a far cry from her previous features, Little Women and Ladybird, so consider our interest thoroughly piqued. Not to mention the rapidly ballooning cast, which is also set to feature queer icons like Hari Nef and Kate McKinnon, and Miss “Levitating” herself, Dua Lipa.

#BARBIE
July 21, 2023
Only in theaters pic.twitter.com/mauCGpizD1

It’s also been reported that both Simu Liu (Shang-Chi And The Legend Of The Ten Rings) and Ncuti Gatwa (our next Doctor Who) will be playing other versions of Ken, so we’re eager for yet more abs and—hopefully—some Ken-on-Ken action.

And can we just add how nice it is to see Gosling again? The handsome, brooding actor has been laying low since heading to space as Neil Armstrong in Damien Chazelle’s First Man, but he’s got a number of high-profile projects in the pipeline, including the spy vs. spy action thriller The Gray Man, which is set to hit Netflix next month. Soon, the “woke Ryan Gosling” memes will be flooding the internet all over again, and we’re certainly not complaining.

Barbie won’t hit theaters until July 21, 2023, but the excitement online should sustain us until then. Here’s what Gay Twitter™ has to say about Gosling as Ken:

if you feel the desire to text me updates about the Barbie film, I already know the tea before you know the tea. I have already processed the Ryan Gosling photo for a thousand lifetimes.

say yes to the jest