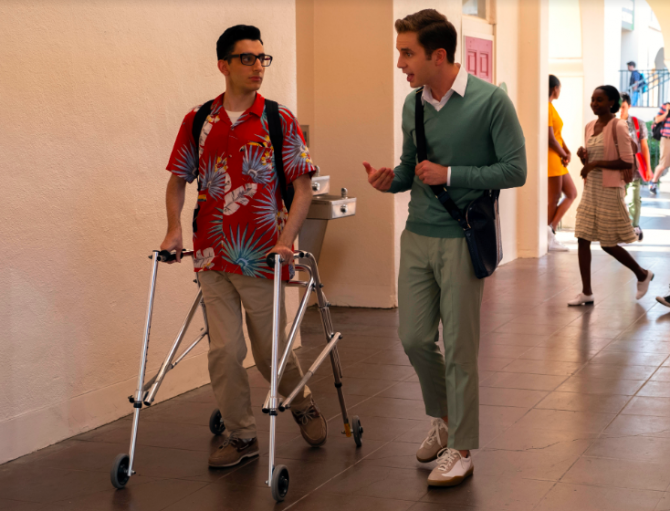 It’s 7 am on a Tuesday, and Ryan J. Haddad, the gay and disabled actor from Netflix’s The Politician is ready to talk. But of course, he can’t get a word in until I do.

“Ryan, thank you so much for so much for taking the time to chat,” I say over the phone, with the air of someone who is clearly in need of at least three more coffees. After all, I had just spent the last two (very late) nights binge watching The Politician, in which Ryan plays Andrew Cashman, a sassy high school senior who is harboring some serious intel.

“I also have Cerebral Palsy,” I declare, trying my best not to sound like some psycho who really wants actors to like him. “So I feel like anytime I see anyone on screen with it, I automatically think ‘I need to speak to them immediately!’”

That we do. For the next 30 minutes, we discuss everything, including how he got cast on the Ryan Murphy-helmed show (which has already been renewed for season 2), why casting directors are secretly his greatest asset in Hollywood, why Bryan Cranston doesn’t need anymore money, and finally, the greatest gift that other Ryan (you know, Ryan O’Connell, who is also gay and disabled with a show on Netflix) ever gave him…

A moment from Episode 2 with @bensplatt

I just finished The Politician last night, and thought it was great, and you were super funny. Tell me, how did you get the part?

They were specifically looking for an actor with cerebral palsy. It was in the character description for the audition, even though he really only says cerebral palsy once in the show, in Episode 2. He is obviously referred to as disabled, but it really wasn’t part of the plot, which was exciting to me that I could be so integral to the story, and play a character where my cerebral palsy isn’t the centerpiece. So I did a tape to audition, and got the part.

That’s amazing! I know a lot of times with these types of roles, the disability becomes so central to the plot or the character, whereas in this show, the disability is kind of a sidebar so to speak. For you as an actor, and specifically as a disabled actor, were you hoping the disability would be more of the plot?

No, because frankly, in my everyday life as a 27 year old living in New York, there’s not a moment that goes by that I don’t know I’m disabled. I recognize that my interactions with strangers specifically are always shaded or colored by being disabled. There is no way they can’t see it, right? But in my day to day with friends, and family, it’s not like my disability is a huge plot in my life. So I think as a disabled person, for me, [the show] was a reflection of my reality. Yeah, I have cerebral palsy but I don’t feel like I struggle with it, I don’t feel like its a cloud over me. This is just who I am, it is all I have known, as I am sure it is the same for you.

I was excited to play a role that didn’t feel like it had to go out of its way to highlight it. It was just there, and I think that is true in real life as well.

I know, it’s the same with me. My disability is just a part of my life, and all I have ever known. It’s not like some big thorn in my side, it’s just my day to day, and I really love that the show reflected that. It didn’t dwell on it. It was just part of the story and part of the characters and I think having that kind of representation is so important, especially since we haven’t had much of that before.

That said, it seems cerebral palsy is the new “It Girl” in Hollywood, with you on The Politician and Ryan O’Connell on Special. So what is like for you to be part of the whole movement of disability finally getting its moment on screen?

I feel very fortunate to have come up at this time, but I know a lot of people put in a lot of work for a lot of years to get us to this place… It just happens to be that, in this particular moment on the screen, you have two Ryans, you have me and Ryan O’Connell. And what I will say about that is, Ryan got to this place of his show being on Netflix because he had the desire to tell his story, and he told it well.

It really was great!

But I think – and I will say this because we are two men with CP talking – the greatest gift Ryan’s show gave us was the sex scene between him and the sex worker. I mean that is what I have been pushing for in my career, to sexualize the disabled community so that people can find us romantically desirable, attractive, and sexy. And there it was on my television screen, and it was gorgeous. Every single minute of that scene, I thought, “I have lived this scene!” and to really, fully see yourself represented for the first time in your life on that kind of platform, is a really rewarding experience and I am extremely grateful to Ryan for creating it, and hopefully continuing it.

I’m grateful to be part of this moment, definitely, but I acknowledge that there are many people that are part of this moment. Just because Ryan and I are the two people with CP on TV doesn’t mean we are the only ones. I am hoping that this peak of interest in disabilities helps many more stories to be told in different ways.

Totally. Kind of piggybacking on that, do you think that representation of disabilities in the media is getting better?

We are not there yet though. There is still a movie with Bryan Cranston where he played a quadriplegic at the beginning of 2019. A major star like him, who quite frankly did not need the money, and who worked with RJ Mitte (another actor with a disability) on Breaking Bad for so long, you would think he would have been a bit more evolved when he read for that role. It comes down to him and also the producers that cast him.

But I do think there is a wave of casting directors that are becoming much more aware. Some of my greatest advocates in entertainment are casting directors, and are the reason I have roles like this.

A year ago I played Patti LuPone in THE MAIDS. Photo by @danielraderphoto

Oh wow. I like that. But beyond those casting directors, is Hollywood becoming more aware and willing to cast people with disabilities, do you think?

Yes, I think so. But I do think we are at a point where it has to start with the writing, the writing has to be intentional. I am fully aware that the only reason the director asked to see me [for The Politician] is because [disability] was literally written into the script for the character, and that’s a credit to the show’s creators, Ryan Murphy, Brad Falchuk, and Ian Brennan, and to the gorgeous casting directors.

But up til that point, I’d mostly done theater work. I had a very tiny part on Unbreakable Kimmy Schmidt. That came from casting directors as well, who had said, “We like him, we want to help him get the foot in the door.” But it was more like Kimmy Schmidt got my toe in the door [laughs] I mean it was a fun part but I didn’t have any dialogue. And then I did a couple shows on CBS and it was like “Okay, I have two lines of dialogue.” So what I mean to say is, somebody with my level of experience on TV wouldn’t necessarily have been seen right away, unless the character was written to have CP, which mine was, and the reason why I was considered for the part on The Politician in the first place.

So, I know representation increases when it’s part of the conversation from the beginning, and that always starts with writing. The more writing that’s done to integrate characters with disabilities, the farther we’re going to come and the faster we will get there.

I’m grateful for [The Politician‘s] efforts to be inclusive in so many ways. It is extraordinary when you’re not tokenized, or only there to check the diversity box. If my character was just like, “Oh I’m here, hi! I’m Andrew and have CP,” that’s boring! Nobody cares. People care about my character because I have some really juicy information, and say some really sassy things.

There is no one thing that is going to solve the lack of disability representation in the media. We are in a place where it is getting better, but there’s a long way to go, and a lot of people that are needed to make that happen.