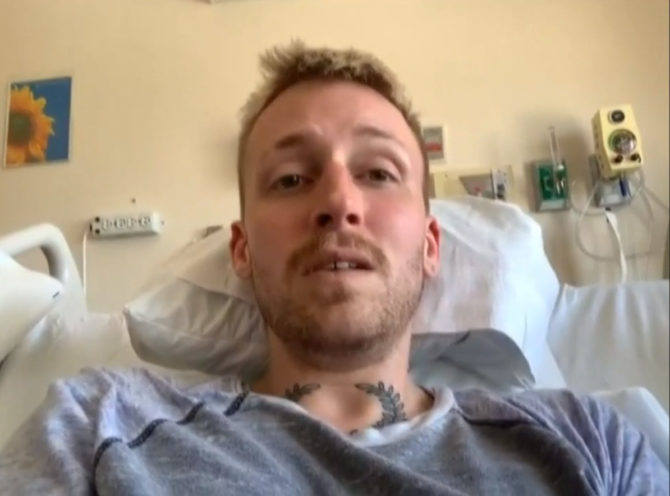 A gay man living in San Diego has appealed to the public for help with medical expenses and in identifying his assailant after a brutal attack left him hospitalized.

Jack Castillo, 31, was born in the United Kingdom but has long since taken up residence in San Diego. Following a drag show in San Diego’s Hillcrest neighborhood on Saturday night, an unknown man approached him on the street. The assailant put a gun to Castillo’s head and demanded the fanny pack he was wearing. Castillo refused, at which point the assailant shot him in the leg. The attacker then took the fanny pack–which also housed Castillo’s green card, house keys and passport–and fled into the night.

“I was on my phone, turn around and he had a gun to my head. I thought it was a taser, I thought, it was a joke. Then he shot me in the knee,” Castillo told ABC 10 News.

The attack left Castillo hospitalized with extensive damage to his kneecap. His recovery will require at least eight weeks, and Castillo does not have health insurance. He has since set up a GoFundMe page to help cover his medical bills.

“My name is Jack, I am a queer immigrant from the UK, living and working in San Diego,” Castillo wrote on the page. “I have been working two jobs every day for weeks to try and make ends meet. I am scared I won’t be able to pay my rent or bills. If you know me you know I am never someone to ask for help, but I don’t have another option right now.”

Since launching the GoFundMe, Castillo has undergone surgery on his leg. At the time of this writing, Castillo has raised over $25,000 of a $35,000 goal.

San Diego police, in the meantime, have opened an investigation into the attack. They are currently seeking a suspect described as white, 5-foot-10, with a medium build.

Head here if you wish to made a donation.