The Bernie Sanders campaign has gone into damage control mode following the revelation of a staffer who ran a private Twitter account to troll Sanders’ fellow Democratic primary contenders.

Ben Mora worked as a regional field director for the Sanders campaign in Michigan. The Daily Beast now reports that Mora had used the Twitter handle @perma_ben to attack Sanders’ fellow candidates and their families. Mora referred to Sen. Amy Klobuchar as “pained, chunky, [and] confused origin/purpose.”  He referred to Sen. Elizabeth Warren–normally a respected associate of Sanders–as a “dumb Okie,” and “an adult diaper fetishist” that “looks like sh*t.” Mora also repeated the accusation that Warren lied about Native American ancestry to get into Harvard.

When it comes to Pete Buttigieg, Mora said he “is what happens when the therapist botches the conversion.” He also predicted that Pete’s husband, Chasten, will be “busted for running a meth racket.” Mora, who is gay himself, also didn’t hesitate to attack other queer figures including activists on Instagram and the cast of Queer Eye. 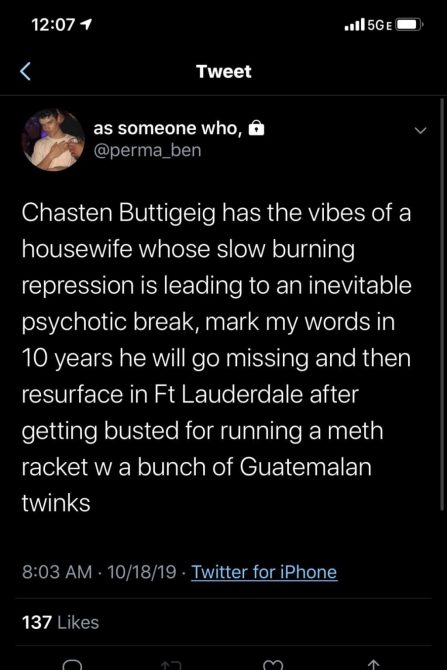 He also attacked gay supporters of other candidates. “Just got into a public screaming match with a gay staffer for the Democratic Party of Iowa who was trying to f*ck me and let’s just say….. he cried and I’m not sorry,” Mora tweeted in October. “This is if he had been a single modicum of hot I wouldn’t have protested at all but literally how dare you be a shill and also ugly with HORRIBLE BREATH.”

Update: Mike Casca, Sanders’ communications director, told me that “we are running a multiracial, multigenerational campaign for justice where disgusting behavior and ugly personal attacks by our staff will not be tolerated.”

Mora has been fired. https://t.co/PRmITbU4zk

In a statement, the Sanders campaign assured the public that Mora had been fired, saying “we are running a multiracial, multigenerational campaign for justice where disgusting behavior and ugly personal attacks by our staff will not be tolerated.”

Though Mora has since deleted the entire account, the revelation of a direct link between the Sanders campaign and cyberbullies undermines Sen. Sanders’ own claim that his supporters are not responsible for online harassment. In the past, Sanders has suggested Russian troll bots may be the culprits.