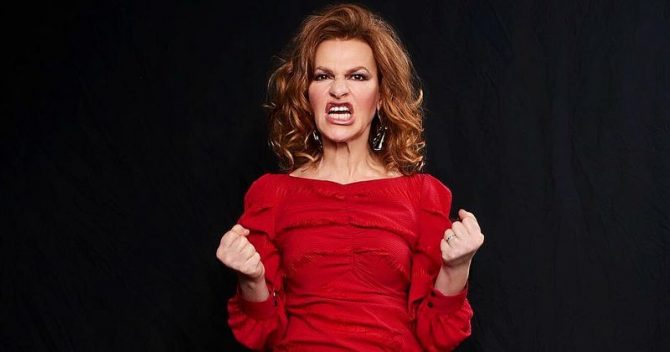 Sandra Bernhard recently sat down with Tim Teeman over at the Daily Beast for a wide ranging interview about everything from Donald Trump to #MeToo to her appearance on Season 2 of Pose.

Of course, no Bernhard interview would be complete without a question or two about her former BFF Madonna, whose new album Madame X comes out on Friday.

Back in the late ’80s and early ’90s, the duo were often spotted running around New York City together, making joint appearances on The David Letterman Show, and, at one point, even rumored to be lesbian lovers.

“She came to my show in 1988, came backstage, and then we started hanging out,” Bernhard told Wendy Williams back in 2010. “We would go out, we would have a genuinely great time, and I think we were a really good example of two women being friends.”

Then one day, that all abruptly ended.

“I like to maintain my friendships,” Bernhard said. “But, you know, certain people can’t handle those kinds of friendships.”

But apparently Bernhard is officially over being asked about that time in her life because the moment Teeman brought it up, she looked back at him and said curtly, “I haven’t been in touch with her for years. This is a very overly examined relationship at this point.”

When Teeman asked if the lesbian romance rumors were true, Bernhard simply stated, “No.”

Here are some other highlights from the Daily Beast interview…

I don’t give a sh*t what anybody’s sexual orientation is, or their color or religion. All I’m interested in right now is someone who is committed to changing the narrative in this country, and reaching people who are afraid of change.

I never really came out, honestly. I was always someone who said, ‘Be who you are. I am who I am.’ I was talking more about sexual fluidity than coming out. I never wanted to make big statements like that because I am more interested in being who I want to be with and comfortable, and expecting everyone to do the same.

On being labeled bisexual:

I guess, if we have to get into these didactic conversations, yeah, I’ve been with my girlfriend for 20 years, so it’s really not even up for discussion. But for my own feelings and emotions, I mean I find find certain men, like certain women, attractive. But I’m with my partner. And we have been together for a long time and we’re happy, and that’s where that’s at.

don’t really care about marriage. If it was about something important for our civil liberties, maybe we would. Right now, we’re good the way it is.

I’m anti-bitter. I love life, new experiences, meeting people, and new friends. I’m incredibly open. I love everything that has happened in my career. I feel the same way now as I did when I was 20. I’m always ready for a new, wonderful experience to come my way.