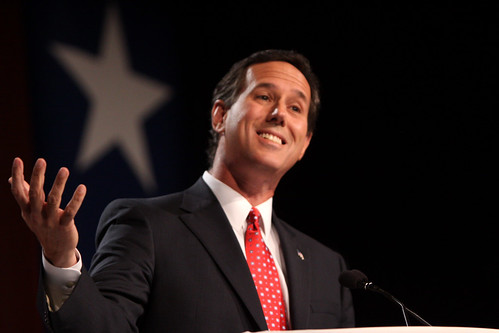 Former Sen. Rick Santorum—he of the man-on-dog analogy and sexless sweater vest—emerged from the campaign equivalent of hospice care on Tuesday night to claim victories in three states: Minnesota, Missouri and Colorado.
Of course, the victories came in races where his opponents were largely absent until the last minute and where actual delegates weren’t selected. But, hey, a win’s a win, and when the mainstream media is eager to keep alive the fiction that the GOP presidential nomination is still up for grabs, Santorum is due for a few days of pundit speculation about his chance to derail Mitt Romney. Given his feeble bankroll and equally feeble campaign operation, Santorum probably has a better chance at replacing Madonna as the half-time entertainment at next year’s Super Bowl than toppling the ultra-rich Romney as the frontrunner.

But once again the real issue isn’t fringe candidates like Santorum and Newt Gingrich but the anointed candidate of the GOP establishment: Mitt Romney. It’s a bad night when you can’t get more votes than you did the last time you ran (and lost), and Romney consistently underperformed in all three states. In part, this may have been because Gingrich wrote all three states off, which meant hard-core conservatives who distrust Romney could rally behind a single candidate. But more pointedly, the results show a real lack of enthusiasm for Mitt, the same problem that dogged him in South Carolina. Turnout was lower in counties that Romney carried in 2008, and his percentage of votes was lower as well.

Does any of it matter? Not as far as the nomination is concerned. The cards are stacked in Romney’s favor, as are the dollars. Yes, the party faithful will go home with him when the bar closes at 3 am, but not before and only because they have to go home with somebody. The longer the GOP primary season goes on, the more flawed Romney looks. If he can’t seal the deal when faced with three weak, underfunded candidates, how will he fare against an incumbent president who is on track to raise nearly one billion bucks?

The federal circuit court ruling on Proposition 8 may give Romney one opening. Marriage equality remains the one topic that the once pro-gay Romney can use to establish his bona fides with Religious Right voters and to hammer Obama. That’s why he made such a big deal of the court ruling. He needs to get evangelicals on his side to put the nomination away once and for all. We’re going to prove the ideal punching bag for Mitt to prove he’s not a weak sister after all.