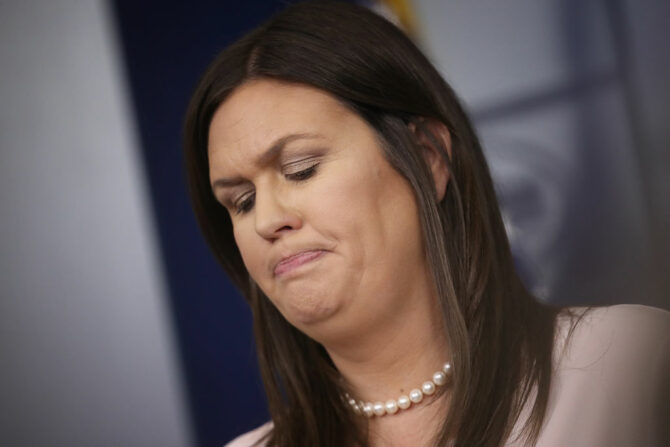 This morning, Donald Trump‘s former White House propagandist, who is currently a candidate in the 2022 Arkansas gubernatorial election, tweeted: “A record-breaking presidency… Record-high crime. Dangerous crisis at the border. 40-year high inflation. Soaring gas and food prices. Americans are hurting as Biden’s policies create one disaster after another.”

Americans are hurting as Biden’s policies create one disaster after another.

Generally speaking, when your ex-boss holds the record for being the first U.S. President in history to be impeached twice, and is a member of an elite class of one-termers, it’s usually best to avoid criticizing other “record-breaking” presidencies.

But that’s really beside the point. As is Sanders’ tweet. She’s running for Governor of Arkansas, not President of the United States, so fear-mongering about an imagined “crisis” at the U.S. border and criticizing President Biden’s policies makes absolutely no sense in her quest to govern the state that ranks 49 in healthcare, 48 in crime, 41 in education, and has a 15% poverty rate. But we digress.

Record employment, record vaccinations, etc. Global issues adding to inflation. Record profits for oil companies…..tell it like it is

Lowest unemployment and highest wages-don’t forget that. Your republican colleagues already said they were raising taxes on middle class if elected.

Disaster!?! Remember what Trump did with Covid?🤣

Okay, so you’re running for governor of the United States?

Historically high political corruption from a former president, his family and his political minions. A far greater threat to the lives of Americans than gas, inflation and a bogus border fabrication designed to deflect our attention from the criminal activities of Republicans.

Arkansas has the 5th highest murder rate in the nation.

Exactly what is the dangerous crisis at the border, Sarah? I know you’re afraid of and hate Mexicans, is that what you’re bemoaning? Please specify.

A record breaking presidency when your guy Trump was the FIRST president in the history of our country who did not facilitate a smooth transition for the incoming president. Despicable and unlawful and that is your party

Are you running for president now? What are you going to do to help AR? Your opponent isnt talking about trump v Biden and regurgitating BS talking points. He’s out to improve lives. @JonesForAR

Last month, Sanders trended on Twitter after an article from December 2019 resurfaced that talked about how she mocked then-candidate Joe Biden for stuttering during the sixth 2020 Democratic presidential primary debate.

At the time, Biden responded to Sanders by saying: “I’ve worked my whole life to overcome a stutter. And it’s my great honor to mentor kids who have experienced the same. It’s called empathy. Look it up.”

I’ve worked my whole life to overcome a stutter. And it’s my great honor to mentor kids who have experienced the same. It’s called empathy. Look it up. https://t.co/0kd0UJr9Rs