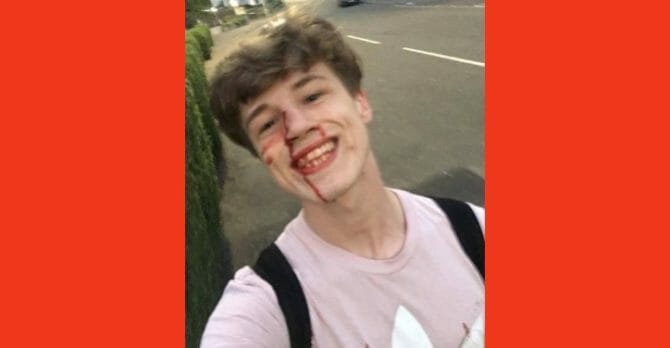 The victim of a violent homophobic attack in Scotland is showing that love is still awfully powerful, even in the face of ignorance and hate.

Blair Wilson, 21, was walking home from his mom’s house in the town of Neilston when a stranger took it upon himself to call him a “f*ggot.”

Instead of walking away, which is the safe choice especially if you’re alone, Blair confronted the meddlesome homophobe.

Words quickly turned to violence when the man physically lashed out at Blair, leaving his nose cut, blood running down his face and shirt.

Blair retreated, but it was his next decision that’s garnering attention around the world.

The young man pulled out his phone, and through cuts and blood, took a beaming selfie.

He told the Barrhead News:

“I thought, clearly, this person doesn’t realise how close Neilston is and I just wanted to post something so that, when he sobered up, he might see how much love and support I have.

I knew, as soon as it happened, that I could either keep quiet and feel embarrassed about it or I could shame him over Facebook. As soon as I posted it, even though my nose was still bleeding, I didn’t care.”

“It’s amazing. I’ve heard from so many people I haven’t spoken to in ages and people I don’t even know telling me I’m an inspiration and stuff. It’s made me feel so good about myself.

I did use some choice words in the post, but the message I wanted to get across is you need to stick up for yourself. Maybe don’t go getting yourself hurt, but show them you have friends, you are loved.

I think some people think because you are a different sexuality from them you have no friends and everyone is in the same mindset of them, when the reality is they’re the minority.

You can prove to them you’re much more loved than they will ever be if they live a life of hate.”

Local police are now looking into the attack.