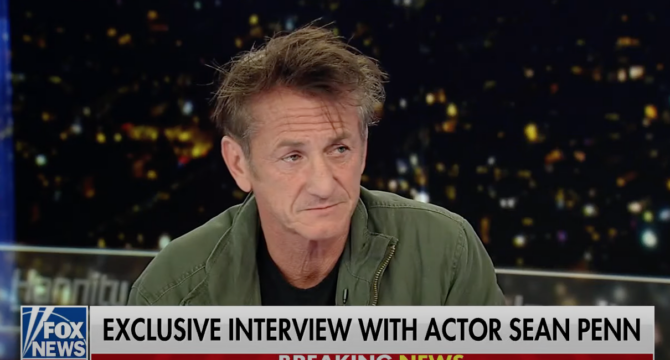 Actor and humanitarian Sean Penn stopped by The Sean Hannity Show on Tuesday to talk about the Russian invasion of Ukraine. Penn was in Ukraine filming a documentary for Vice when the invasion began, and has since traveled back to the country.

Hannity began the interview by bringing up his initial contact with Penn. “I made the first phone call to you,” Hannity said. “Do you remember what you first said to me?”

Laughing, Hannity asked, “Is there a reason you don’t trust me?”

“Yeah,” Penn said, “there’s a lot of reasons I don’t trust you. But we have to get on with life. We all talk about how divisive things are, how divided things are here. When you step into a country of incredible unity, you realize what we’ve all been missing. I don’t think I’ve got time to indulge my lack of trust, which becomes a petty thing. These people are fighting for the dreams and aspirations of all of us Americans.”

“I don’t think that I’ve got time to indulge my lack of trust, which becomes a petty thing as people, and babies, are being vaporized,” Penn added. “And that these people are fighting for the very dreams that are the aspirations of all of us Americans. We talked about that, too, and we agreed on that.”

But Hannity wasn’t quite through. Later in the interview, Penn spoke about his first conversation with  Ukrainian President Volodymyr Zelensky last fall.

“It’s interesting,” Penn said. “We had met initially on a Zoom call back…” “Did you trust him?” Hannity interrupted, “A lot more than me.”

“I was interested to see who he was,” Penn responded, “I didn’t have the baggage with him I have with you.”

“What is the baggage?” Hannity asked. “We never met before.”

That baggage turned out to be a 2007 segment in which Hannity referred to Penn as an “all-around very angry man” and dubbed him an “enemy of the state” for speaking out about the Bush administration.

“As a badge of honor at my house,” Penn said, “I got the full screen that I dominate as an enemy of the state with you in the foreground.”

Hannity pressed the trust issue yet again at the end of the interview, asking, “Do you trust me? Did I keep my word? So why don’t you trust me?”

Penn wrapped it up with an analogy. “You know what happens is that there’s a lot of physical therapy necessary after a big car accident,” he said. “You don’t get it all done in a day.”