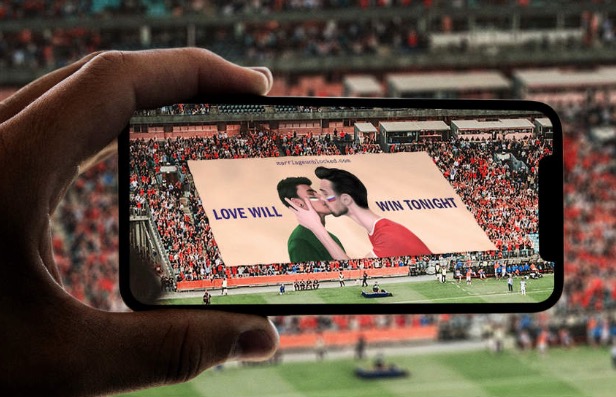 As the World Cup kicked off June 14 between Russia and Saudi Arabia, two countries that make life difficult for LGBTQ folks, there was a secret pro-gay message hiding in plain sight at the packed stadium.

By following this link on mobile devices, fans saw a special image when they aimed their cameras at the crowd or the field.

Through augmented reality (think Pokemon Go), a gay couple appeared kissing with the Russian and Saudi Arabian flags on their cheeks.

The project is intended as a protest against anti-LGBTQ forces in the two nations, both of which take tough, unjust positions against queer people.

The so-called “gay propaganda” law prohibits teaching minors about LGBTQ equality in Russia, while homosexuality in Saudi Arabia is still an executable offense.

Fans are encouraged to take screenshots of their phones while the AR is visible and share them on social media using the hashtag #MarriageUnblocked.

A sports and fashion brand out of Sweden, Björn Borg, is promoting the stunt to launch a new digital campaign of the same name, Marriage Unblocked.

Here’s how they describe Marriage Unblocked:

We believe that being all you can be in sports first demands the right to be who you are in life. The first basic right is to love whoever you want. Marriage unblocked makes it possible for everyone to go down the aisle on blockchain, store your encrypted vows forever and get a certificate of your digital marriage. Anonymously or proudly public. No state, religion or family approval needed. Because just like sports, love is for everyone!

Sounds confusing! But you can’t argue with their message.