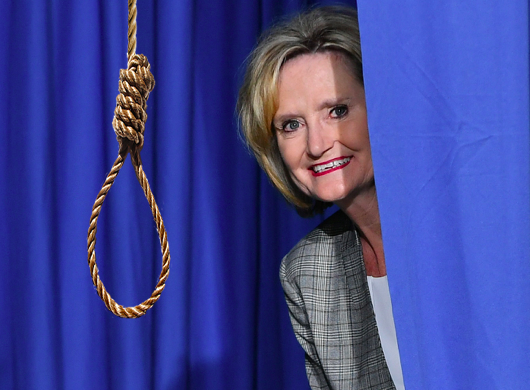 Meet Sen. Cindy Hyde-Smith of Mississippi. She’s currently fighting to keep her seat in the U.S. senate, to which she was appointed earlier this year following the retirement of Thad Cochran.

Hyde-Smith finished first in Mississippi’s “jungle primary” on November 6, but she was unable to win more than 50% of the vote, meaning she’s now in a runoff against Democrat Mike Espy, who is poised to be the state’s first African American U.S. senator since Reconstruction.

This week, Hyde-Smith, who, naturally, opposes same-sex marriage (she says it goes against her “personal and religious beliefs”), came under fire when disturbing video of her using racially-charged language emerged online.

In the video, the 59-year-old Trump ally can be heard praising one of her most loyal supporters at a campaign event, telling a crowd of white people: “If he invited me to a public hanging, I’d be on the front row!”

Given Mississippi’s long history of lynching African Americans, and the fact that Hyde-Smith is running against a black man, the comment didn’t go over so well.

But rather than apologize, Hyde-Smith dug in her heels. At a press conference this week, she said she was just joking before telling people to stop being so sensitive and then refusing to answer any further questions.

“In referencing the one who invited me [to the event], I used an exaggerated expression of regard,” she snarled, “and any attempt to turn this into a negative connotation is ridiculous!”

Then yesterday, Hyde-Smith faced a new wave of criticism when another video of her making an unsettling “joke” hit the internet.

This time, she was talking about voter suppression, which just happens to be another issue the state of Mississippi has a long history of engaging in, particularly when it comes to oppressing the black vote.

“They remind me that there’s a lot of liberal folks in those other schools who maybe we don’t want to vote,” Hyde-Smith can be heard telling a crowd outside her campaign bus. “Maybe we want to make it just a little more difficult. And I think that’s a great idea!”

It’s unclear what “folks” or “other schools” Hyde-Smith is referring to in the video, but Mississippi does have several historically black colleges and universities that tend to skew liberal.

After the video was released, Hyde-Smith again went on the defensive, tweeting that she was only kidding, then told people they need to get a sense of humor.

“It’s OK to still have a sense of humor in America isn’t it?” she tweeted. “These students enjoyed a laugh with Cindy despite out of state social media posts trying to mislead Mississippians.”

It’s ok to still have a sense of humor in America isn’t it? These students enjoyed a laugh with Cindy despite out of state social media posts trying to mislead Mississippians. @espyforsenatehttps://t.co/dcObRfHpMi pic.twitter.com/nfOi3ifekq

We’re beginning to think this woman has a very sick sense of humor. Either that or she’s racist trash. Maybe both.

Mississippi’s runoff election will be held on November 27.