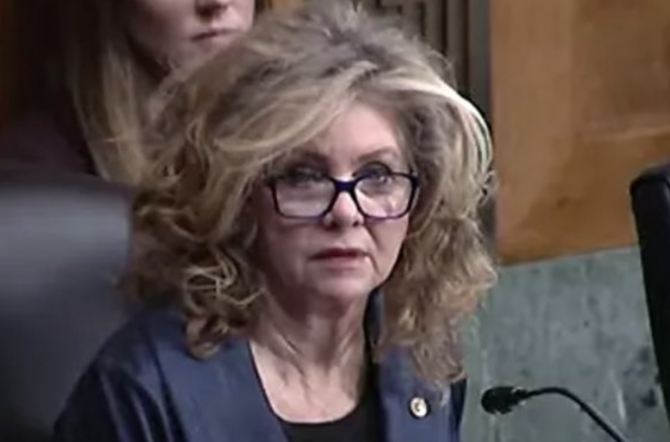 Blackburn used her time at Judge Ketanji Brown Jackson’s Supreme Court confirmation hearings this week to attack and mischaracterize Jackson’s record on abortion, and describe Roe v. Wade as “one of the most brazen acts of judicial activism.”

The senator continued to express her anti-abortion viewpoint on Twitter Wednesday evening, attempting to school the nation about how the right to get an abortion is not in the U.S. Constitution.

Her civics lesson was not well received, since all she really proved was that she hasn’t actually read the Constitution in a while.

“The Constitution grants us rights to life, liberty, and the pursuit of happiness – not abortions,” Blackburn tweeted, quoting the opening line of the Declaration of Independence.

For some reason, she still hasn’t corrected it as of Thursday morning:

The Constitution grants us rights to life, liberty, and the pursuit of happiness – not abortions.

Here are some of the responses:

That’s the Declaration of Independence you bag of hair.

That’s the Declaration of Independence NOT the Constitution. https://t.co/OgzXOUbhzC

I’m pretty sure most republicans haven’t read either one.

That’s Declaration of Independence. Though it figures you don’t know. I’ll argue pursuit of happiness means “my body my choice.” Otherwise all unvaccinated should be forced to. But I won’t tell them what to do, you have no right to tell anyone else. pic.twitter.com/b87gZV0D2C

Someone who doesn’t know the difference between the Constitution and the Declaration of Independence shouldn’t be involved in making laws.

That’s a phrase from the *checks notes* DECLARATION OF INDEPENDENCE, NOT the Constitution. I learned this freshman year of HIGH SCHOOL. Frankly, you have no business adjudicating the judge’s qualifications for SCOTUS