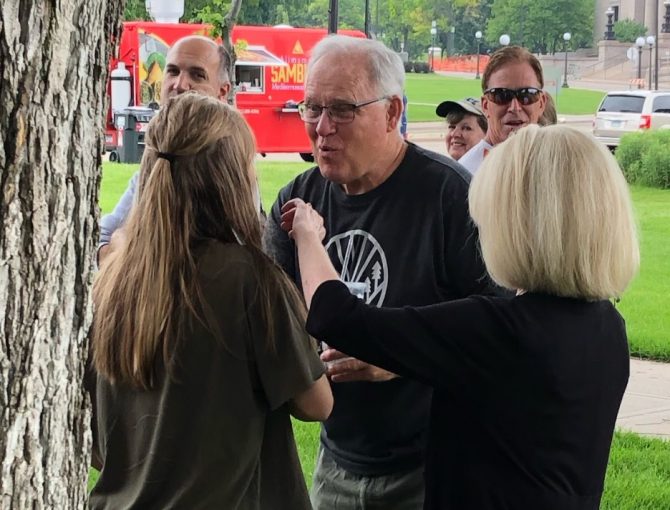 Dan Hall is a chaplain and a Republican state senator from Minnesota who was first elected to office in 2010.

While the rest of the city was out celebrating Twin Cities Pride in Minneapolis last weekend, he was spotted across town at the state Capitol Building attending an antigay “Freedom March.”

The event billed itself on Facebook as an afternoon of “celebrating freedom from homosexual/transgender lifestyles by the grace and power of Jesus.”

Hall’s appearance there came mere weeks after he worked to squash a bill that would banned the widely discredited practice on minors in his state.

During the event, he received high praise from one of the organizers, who said, “He was instrumental in helping to shut this down,” regarding the proposed conversion therapy ban.

The bill passed in the state House but was in the state Senate back in May, with all Republicans voting against it.

67-year-old Hall has a long history of promoting antigay causes and making homophobic remarks. In 2012, for instance, he suggested anymore who supported same-sex marriage was unpatriotic.

And in 2013, he said he would “personally go to jail” before he would ever “perform a marriage to a homosexual.”

Also in 2013, Hall threw a temper tantrum at a Senate hearing after he says he was accused of being called a bully and a bigot for discriminating against LGBTQ people.

And just two weeks ago, he posted an article on Facebook sharing a bogus study claiming that there’s “no evidence people are born gay or transgender,” and quoting a section of the article that says queerness is the result of childhood sexual trauma.

In the past, Hall has also opposed things like equal pay for women and school integration.

“It’s no wonder Hall and his fellow Senate Republicans voted down an attempt to ban conversion therapy in Minnesota,” Martin continued. “While Minnesotans overwhelmingly support their LGBTQ peers, it’s clear that Republicans remain mired in the prejudice and hate of the past.”