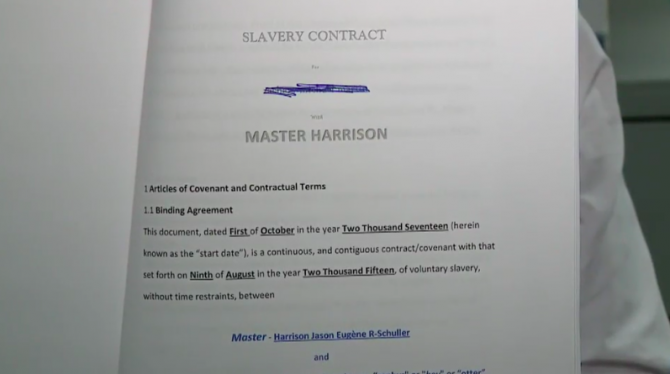 A Detroit man who allegedly sent his ex-lover’s nudes to the victim’s family and friends, including his mother and grandmother, says he’s too broke to pay restitution for his crimes.

The victim, referred to in court documents as “Zachary,” first met a man by the name of Harrison Jason Eugéne Schuller (a.k.a. “Harry”) on Scruff in 2017, where he sent him several nudes as well photos of himself engaging in various sex acts.

The relationship carried on for a while, though the two men never actually met in person. When things eventually fizzled and Zachary terminated the contract, Schuller became irate. He allegedly accused Zachary of owing him $20,000 and began leaving him threatening voicemails.

In one recorded call, Schuller can be heard saying, “Hello. Somedays I am in love with you and somedays I hate you. I am not a nice person. I am mean. I am vengeful. I am not sorry for anything I am going to do to you or your family.”

Shortly after that, Schuller allegedly sent Zachary’s nudes to Zachary’s mother, grandmother, grandfather, cousin, and several of his friends, though he claims he has absolutely no memory of doing this.

“Our client even sought a personal protection order to try and put an end to this nonsense,” says Bristow. “However, Harry continued calling our client.”

“If you get money judgments against you for revenge pornography, it is going to stick with you for life,” explains bankruptcy attorney Derek Jacques.

Zachary has yet to receive any money from Schuller. Meanwhile, Schuller says he plans on defending himself in his upcoming civil case. A date for that trail has yet to be scheduled.