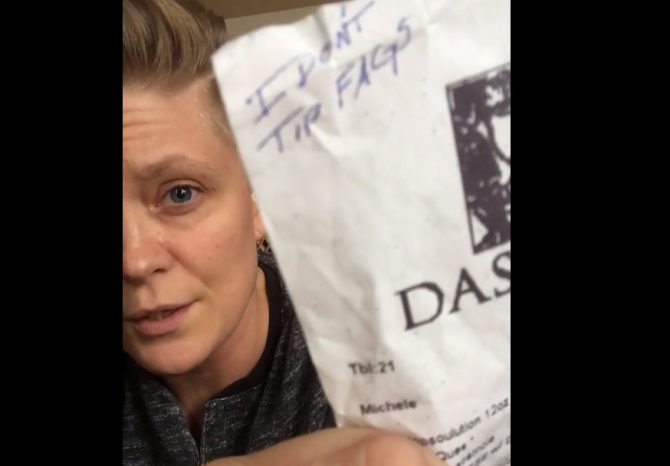 A waitress at the Dash-In restaurant in Fort Wayne, Indiana has taken her experience with anti-gay harassment to the web.

Michelle Crider posted a video to her Facebook feed on Tuesday, sharing a story about serving two unruly customers. “It’s just one of those tables that didn’t want to be bothered, is what I thought,” Crider says in the video. “So I served them and the guy said he’d take the check, I gave it to them and they were in and out.” When she returned to pick up the check, Crider got more than she expected. “I waited a little while to go pick up the check and to my surprise he wrote ‘I don’t tip f*gs.'”

Related: White supremacists are ringing bells for the Salvation Army in Indiana

Throughout the video, Crider remains calm, expressing pity rather than outrage for her disrespectful customers. “I just can’t wrap my head around it,” she says. “Why did you feel the need, sir, to write that on there? If you don’t like gay people…that’s whatever…but to say something like that? I’m a mother. I work my butt off, sir, to pay my bills, to put my son into a good school and pay that tuition.”

Crider goes on to further express her pity. “I don’t know what happened to you in your life to make you such a miserable person sir,” she adds, “but I feel very sorry for you.” She then adds that her co-workers and the Dash-In staff provided her with nothing but support, including a bouquet of flowers.

“You didn’t win,” Crider declares. “You’re the coward.” As a final needle, she adds one last clarification. “Try to understand what it is that you’re saying. I’m not a fag. I’m a d*ke.”