Ncuti Gatwa, 29 has been announced by the BBC as the next Doctor Who. He will replace actress Jodie Whittaker, who is departing the show this year.

Before this Gatwa was best known for playing the gay character, Eric Effiong, on the hit Netflix show Sex Education.

Related: ‘Sex Education’: Still redefining what it means to be black and gay on TV

Doctor Who started back in 1963. Gatwa will make his debut in 2023 as the 14th Doctor. He’s the first Black actor to take on the role.

Earlier this year, it was announced that Russell T Davies (writer of the original Queer As Folk and It’s A Sin), who previously helmed Doctor Who between 2005 and 2009 would be returning as showrunner for the 60th anniversary season.

Davies and Gatwa both attended the prestigious BAFTA Awards last night in London and talked about the casting.

Gatwa told the BBC that the character of Doctor Who, “means a lot to so many people, including myself”.

He added, “I feel very grateful to have had the baton handed over and I’m going to try to do my best.”

“I’ve known since about February this year, so it’s been tricky trying keep this under wraps, because I’ve got a very big mouth.”

Davies said Gatwa had blown him away with his audition.

“It was our last audition. It was our very last one,” the writer and producer said. “We thought we had someone, and then in he came and stole it.

Gatwa was born in Rwanda before moving to Scotland as a child. He relocated to London aged 21 and landed his first acting role in 2014. However, he struggled to make headway in the industry.

In 2020, he talked movingly about finding himself homeless for a short while at the age of 25, just before landing his breakthrough role in Sex Education.

“Moving into a new place meant paying the deposit and first month’s rent. I started temping but had to take time off to audition for roles I wasn’t getting. When I didn’t get enough temping work, I fell behind on my rent. By the end of my second month of unemployment, I was out of savings.

A friend gave him money to pay off some rent and offered to let him move into his spare room. However, on moving in day, the friend changed his mind

“As I was standing on the street with my suitcases, one thought came into my head: ‘I’m homeless’,” Gatwa told The Big Issue.

He says his role in Sex Education turned his life around.

Gatwa has not publicly labeled his own sexuality but was aware how playing Eric had impacted others.

“I get messages from LGBT people all around the world every day,” he told the Big Issue.

“They say how the show has helped them, or the character has helped them because it is illegal to be gay where they are from. And there are kids who have run away, I get a lot of messages from underprivileged people who are struggling with their sexuality. I’m so glad the show is there to empower them.”

Among those to congratulate Gatwa were Sex Education co-stars Gillian Anderson and Asa Butterfield.

Congratulations to this ray of sunshine Ncuti Gatwa! ❤️❤️➕🟦 https://t.co/4nAO5gvGKi

Incredible, the most deserving man out there. Wowowowowow!! https://t.co/u2pSqHDgzY

Ncuti Gatwa is so good on SEX EDUCATION, a lightning rod of charm and comedic timing. A star from the moment he popped on screen. He’s going to be phenomenal as the next Doctor. #DoctorWho pic.twitter.com/IiM1qjd8UC

Today, Gatwa posted a message on his Insta stories thanking people for their support. 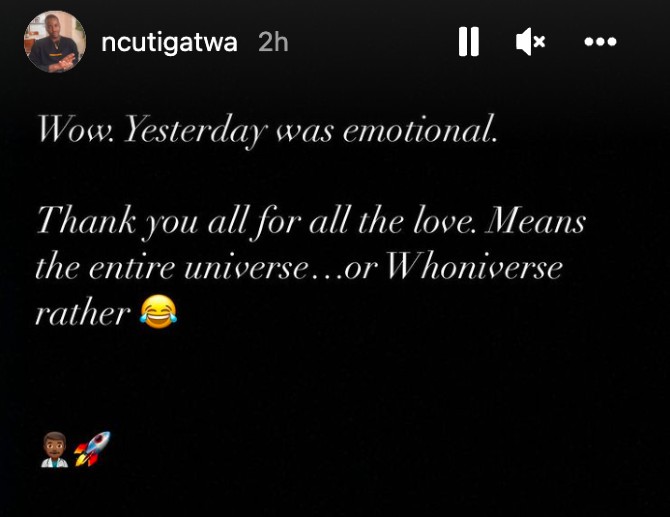