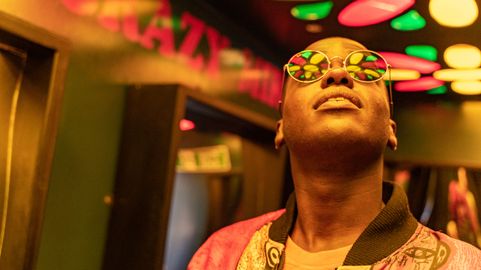 Anyone who watched the first season of the Netflix dramedy Sex Education knows the trouble Eric Effiong has seen. He was bullied mercilessly by Adam, the sexy bad boy with a big … daddy issue. He was gay bashed by homophobes while waiting at a bus stop, after having his bag stolen and being stood up by his best friend on his birthday.

He also had to endure several episodes of side-eye and admonishments from his disapproving African immigrant father. Eric, beautifully played by Ncuti Gatwa, certainly had a rough start on Sex Education, but by the end of the first season, he could count getting blown by Adam during detention among his list of accomplishments. All things considered, it was a pretty happy ending. But was it a sign of better things to come?

Thankfully, yes. In season two of Sex Education, which dropped on January 17, high schooler Eric finally graduates from the sidekick role once reserved for black gay characters on TV into something of a romantic lead. To be fair, he was never merely wingman to the show’s white main protagonist Otis Milburn (Asa Butterfield). In season two, though, while Eric is still running commentary on Otis’s love life, he gets to flourish in his own orbit. He not only gains a boyfriend, but he lands at the center of a love triangle.

Of course, being that Otis is Sex Education’s primary character, his love life and his relationship with his family gets most of the screen time per episode. And once again, when he and Eric talk lives and loves, they usually talk about Otis’s. But even so, the spotlight shines on Eric’s love life more than it generally does for any gay black character on a TV show that isn’t Pose or Empire.

After the obstacles Eric faced in the first season, it’s nice to see him moving out of stock angst-y gay coming-of-age storylines involving homophobia and the constant threat of violence. Eric is as camp and flamboyant as ever, but this season, it’s more matter-of-fact, less LOL. He is who he is. Got a problem with that?

We see him applying make-up while getting ready for a date, and his trousers are still as loud as he wants them to be. This season it feels more like a natural expression of who he is and not just “Look at me!” styling.

We’re entering a golden age for black gay characters on TV, and none feels more authentic than Eric. Unlike with Jamal on Empire, we don’t see the strain of his trying to fit into a straight world. There’s no “Hey, man” posturing for Eric, even in the presence of macho. He can be proudly camp without falling into any stereotype of how straight people think gay black men act (see Titus Andromedon on Unbreakable Kimmie Schmidt).

I’m not sure I buy that his mother would be so accepting of her son’s gayness, considering her African origin and how religious she is supposed to be (as in the first season, there’s an extended church scene) and how resistant his father initially was to his son’s sexual orientation and styling preferences in the first season. But I’m pretty biased, due to my own experience growing up in a similar situation, being the gay son of black, religious, immigrant parents. Even if Eric’s mother doesn’t represent anything resembling reality, why should gay white boys on TV, like the ones on Schitt’s Creek,  EastSiders, and Days of Our Lives, be the only ones with mothers who embrace the gayness of their sons, toasting to it with a dry martini and a smile?

Eric has his hills to negotiate in the second season, and he sometimes makes dubious choices, but don’t we all? Life gets messy and complicated when your existence is more than being the sidekick of a straight white character. Sometimes it’s a drag (and not in the queen sense), and sometimes it’s a breeze. Thankfully, for Eric, it’s never a bore, especially after a hot new French student (Sami Outalbali) arrives on campus in the first episode.

After an unexpected twist, Eric comes into his own as a three-dimensional gay character who happens to be black. His dating dilemmas echo those of several straight characters this season, which underscores the reality that regardless of gender, love is love, presenting the same potential problems and triumphs for anyone who dares to give in to it.

As I watched the eight new episodes of Sex Education, I found myself thinking a lot about my high school years in the closet and wishing I’d had a black gay TV character like Eric for inspiration. He’s someone who is still not 100 percent comfortable in his own skin, but he nevertheless lives there proudly. (Sort-of spoiler alert) He takes several leaps of faith and fate, and ultimately, he’s rewarded. It gets better — and he doesn’t even have to wait until after graduation for life to begin.