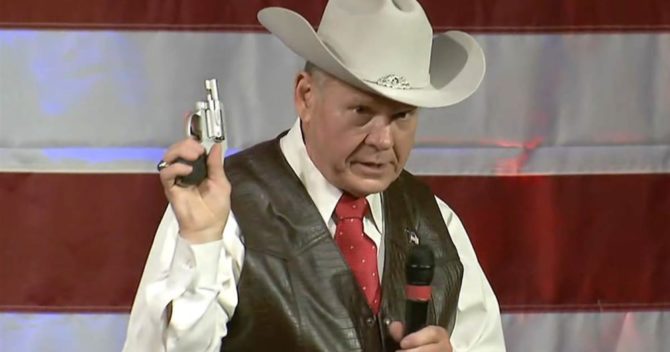 (In case you need a quick history refresher: Dred Scott was a slave who was taken to live in a free state by his master. After the master died, Scott sued his widow for his freedom, but lost the case.)

Related: GOP Senate hopeful Roy Moore isn’t sure whether gays should be put to death

The recording was made last November when Moore appeared on the extremist radio program Here I Stand.

In 1857 the United States Supreme Court did rule that black people were property. Of course that contradicted the Constitution, and it took a civil war to overturn it. But this ruling in Obergefell is even worse in a sense because it forces not only people to recognize marriage other than the institution ordained of God and recognized by nearly every state in the union, it says that you now must do away with the definition of marriage and make it between two persons of the same gender or leading on, as one of the dissenting justices said, to polygamy, to multi-partner marriages.

Moore, who earlier this year declared “God is the only source of our law, liberty and government,” went on to say the Obergefell ruling threatened the rights and freedoms of good ol’ Christian folk:

We’ve got to go back and recognize that what they did in Obergefell was not only to take and create a right that does not exist under the Constitution but then to mandate that that right compels Christians to give up their religious freedom and liberty.

Moore is a longtime hater of the gays. In 2015, he stated homosexuality should be illegal in the U.S. He also called on Congress to impeach the Supreme Court justices who voted in favor of marriage equality and was removed from his seat as an Alabama Supreme Court chief justice after refusing to honor the ruling.

Related: Senate hopeful Roy Moore: gay sex is the ‘same thing’ as having sexual relations with a cow