Valentine’s Day is tomorrow, which means all across the country people are going to expressing their love for one another. There will be lots of chocolates, lots of roses, and lots of hanky panky.

To help you prepare/totally kill the mood, the good folks over at Backgroundchecks.org have put together a handy map of the most “sexually diseased” states in the country.

Related: Not To Alarm You, But This Interactive Map Shows Per-City STD Rates

“With Valentine’s Day fast approaching, love is in the air,” the editors write. “Before the hormones make you do something stupid, take a look at this map and see how likely it is you’ll grab an STD before the day is out.”

The map looks at reported cases of gonorrhea and chlamydia per 100K residents in all 50 states then weighted the scores to see which states fared the worst.

Alaska ranked #1, followed by Louisiana at #2 and North Carolina at #3. States in the Deep South made up for seven of the top 10 when it came to sexually transmitted infections.

On the other end of the spectrum, New Hampshire came in last place, meaning it is the least sexually diseased, followed by West Virginia at #49 and Maine at #48.

Related: Dating Website For People With STDs Outs Hundreds Of Thousands Of Users

According to the CDC, STDs reached an all time high in 2016. Much of the rise is believed to be due to hookup apps Grindr and SCRUFF.

See where your state falls in the map below. And remember to play safe this VD! 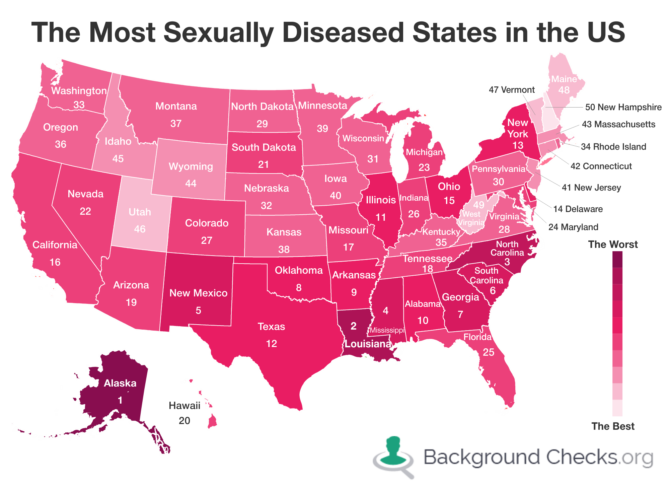