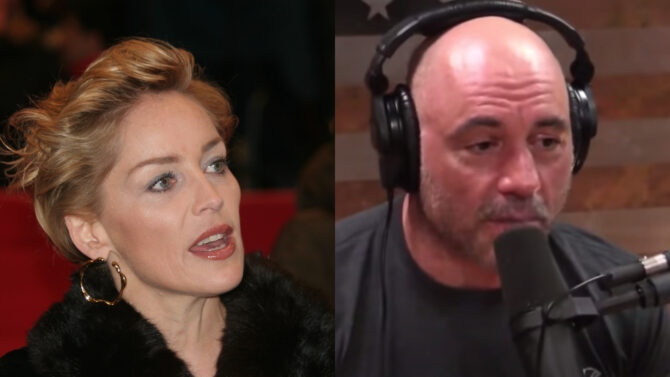 Oscar-nominated star Sharon Stone has weighed in on the ongoing controversy surrounding podcast host Joe Rogan and Spotify, the parent network of his show.

Joe Rogan has come under increasing scrutiny due to his continued spread of misinformation regarding the COVID-19 virus, and his hosting of COVID conspiracy theorists on his show. The past week has seen numerous entertainers, including singers Neil Young, Joni Mithcell, India Arie, and Graham Nash all pull their music from Spotify in protest to its continued support of Rogan. Arie, as well as Mary Trump, have also pulled their own podcasts from the network.

Now Basic Instinct star Stone offered her thoughts on the mess, and did not hold back in her fierce criticism. In an interview with TMZ, Stone blasted Rogan’s dissemination of misinformation in no uncertain terms.

“He should put a disclaimer that he’s an a**hole and that his behavior is dangerous and affecting people’s lives and deaths,” Stone said. “COVID is not an opinion-based situation and Mr. Rogan thinking that his opinion or disclaimer for the lives he personally has affected and caused losses of — it’s not an opinion.”

“Mr. Rogan is risking people’s lives with his idiocy and his professing that his thoughts about COVID are opinions,” she added. “Infectious diseases are science, and they are fact-based situations, so the pretense that these are opinions is dangerous.”

I’m w @Neilyoung cancel my @Spotify accounts in the name of Truth??

Stone had previously voiced her support for singer Neil Young on January 28, taking to Twitter to announce she would delete her Spotify account “in the name of truth.”

Rogan released a video apologizing for his spread of misinformation on Monday, which has thus far included discouraging listeners from getting vaccinated against COVID, promoting ivermectin as an effective treatment for the disease, and hosting conspiracy theorists who claim the pandemic is a “False Flag” operation on a global scale. Spotify, for its part, has announced it will begin issuing content advisories to programs discussing COVID-19, though it did not mention Rogan in its announcement.

Meanwhile, Fox host Tucker Carlson has stepped in to defend Rogan, calling him “a source for safety in this world” despite his spread of false or unsupported COVID-19 theories.