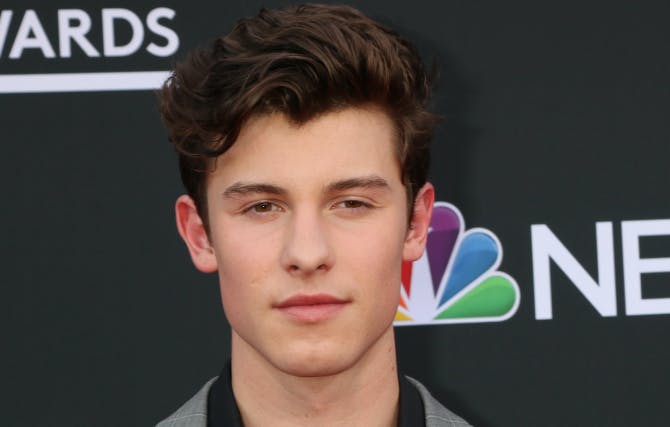 Continuing with his gay-rumor-restrospect, Shawn Mendes took a plunge into the topic with Dax Shepard on the Armchair Expert podcast, following up on recent comments he made to The Guardian.

“You were in a very tough position,” Shepard told Mendes. “There were all these rumors about you being gay early on. And I remember thinking, ‘oh, you’re in this impossible situation because if you wanna come out and go ‘I’m not gay’ it has some weird veil of homophobia’ which I’m certain you’re not homophobic.”

“It was also so frustrating for me,” Mendes responded, “because there were some people in my life that I was very very close to, who were gay and in the closet. And I felt like this real anger for those people. It’s such a tricky thing. You’re right. You want to say, ‘I’m not gay but it’d be fine if I was gay. But also there’s nothing wrong with being gay … but I’m not.’ You don’t really know how to respond to the situation.”

Shepard then commented “it’s a trap.”

“I’ve realized that we just have to stop having to be experts and politicians about it, especially as a famous musician who’s a guy,” Mendes said. “I need to be really fu*king messy and say the wrong things and apologize and say the right thing after I apologize and be confused about how to respond when people say I’m gay. Everyone’s been calling me gay since I was 15 years old. I’m not gay and I’m like, ‘What does that mean?’ I had these problems with the way my voice sounded. I’m like, ‘How do I sit?’ I’m always first to cross my legs and sit with a position of this feminine style and I really suffered with that sh*t. It kind of ended up becoming something I wanted to just be really open about and honest about.”

“I think a lot of guys go through that and even worse than that there are just so many guys who are gay and in the closet and must be hearing sh*t like that and just being like, ‘I’m terrified to come out.’”

Shepard offerer his take on how the rumors could start.

“There’s definitely two obvious reasons that gets rumored. Generally if there’s a beautiful dude who doesn’t have a girlfriend around him at all times. That’s one reason people go ‘something doesn’t smell right here.’ Or another reason would be the one you were nervous about — you were somehow not acting manly or masculine or straight. You had to start thinking about how you moved.”

And Mendes reflected on his upbringing.

“All my cousins were girls,” he said. “I didn’t grow up wrestling. I grew up getting my hair braided on New Year’s Eve. It just completely depends on the way you grew up in your life and your surroundings. Then came a point where it got to be like ‘hell yeah, I got that divine middle ground, that Freddie Mercury’ But then I’m also not there either. I’m totally not there. I’m still a little bit more manly than that. It’s all a little confusing so I’m just gonna let it be what it is.”

Regardless, the musician just achieved his fourth number one album one the Billboard 200 Chart with ‘Wonder’ this week.