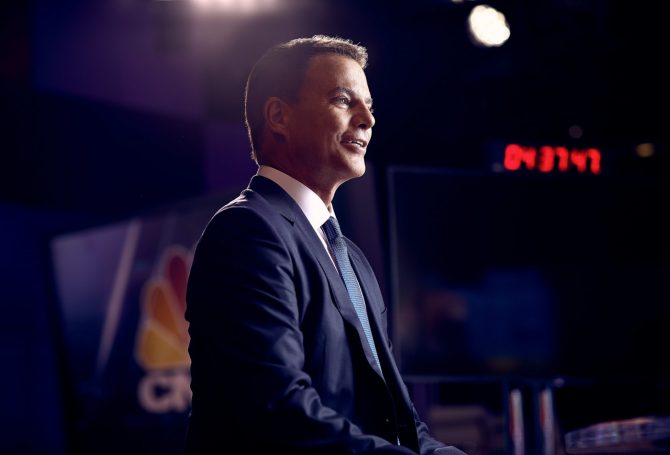 Shep Smith’s new show on CNBC debuted last night and he kicked off things off with quite a wallop.

The former FOX News anchor spent several minutes at the top of the hour railing into Donald Trump and his disastrous debate performance on Tuesday evening.

“Right now, on a brand-new newscast, we’d normally play the best sound and video from the debate, right?” Smith said at the top of the episode. “That’s the lead, the back and forth from the president and the man that wants to replace him.”

However, that couldn’t happen, Smith said, because, well, we all saw the debate and it was an absolute debacle.

“In the debate, the president told a group of white supremacists–some of whom stood by those in Charlottesville with their torches–to ‘stand back and stand by’,” he told viewers.

“Joe Biden declared the duly elected president of the United States unfit to lead, called him a racist, a liar, a clown, and told him to shut up. We’ve never seen any of this. Not in America.”

Smith then promised viewers that his new show would “lay out the facts to the best of our ability in context and with perspective,” a clear dig at his former network, Fox News, which does the exact opposite.

Before going to CNBC's Eamon Javers, Shep Smith concludes his commentary: "We've never seen any of this, not in America but from this, we March toward the vote and tonight, we'll lay out the facts to the best of our ability in context and with perspective." (2/2) pic.twitter.com/SC8m6YGcoQ

Speaking the The Hollywood Reporter last week, Smith said he was glad to be free from the chains and fetters of Fox News so he could finally offer viewers a “facts only newscast.”

“What we want to do, and what I have long wanted to do, is a just-the-facts newscast,” Smith explained.

“I have no issues with opinion people, especially if they begin with fact and opine from there, but there is an absence from my perspective in a fact-based news-only hour, where we lay out the facts, we bring in experts to help understand them better, we add context and perspective, but we don’t opine on them.”

As for joining CNBC, which, of course, is under the same umbrella as MSNBC, Fox News’ liberal counterpart, Shep said he’s “proud” to be with a more friendly and welcoming network.

“I am proud to wear these colors,” he said. “I am just so excited to be back in the game.”

He continued, “Ours is an industry that is known over time to be a very backstabbing thing. You have a bunch of high-profile people who are public figures and, you know, the knives come out. It is not like that here.”

“I have been here for months now, and it is the most warm and welcoming place I have ever experienced.”

Reviews of Smith’s new CNBC show have been mostly positive. Here’s what folks on Twitter are saying…

OK. So I NEVER watched Shep Smith before. I know he has a great reputation. I'm watching his first show on @CNBC and I must say he is knowledgable, engaging and covering many issues. Excellent job here. I would suggest anyone who has never watched Shep before, tune in.

I’m happy to see Shep Smith with his own show outside of Fox.

Amazing seeing MAGA freak out about Shep Smith's show. They are horrified that he is just talking about what happened at the debate. The Fox News bubble just can't handle the outside world. #ProudBoysStandby

well, shepnews wasn't too bad. best domestic newscast i've seen in a few years though, which says more about the state of the tv news business than it does about shep smith, i think. but it was straightforward and almost all actual news.

It is so nice to see @thenewsoncnbc with Shep Smith on the air. Glad to have you back; you are a calm & reassuring voice in the news business

#ShepardSmith is killing it on CNBC, I would sneak over to Fox News in the past to watch his show. I’m so happy he’s found a new home.