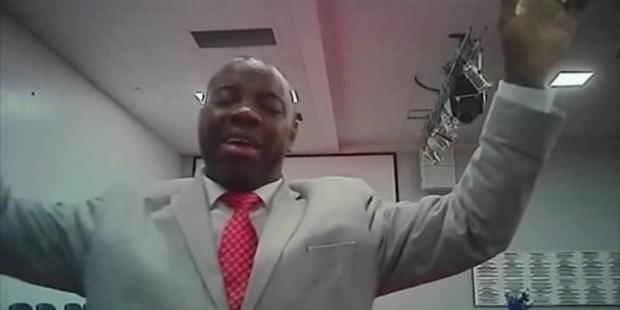 While more US states prepare to ban so-called ex-gay conversion therapy, the harmful practice of trying to change someone’s sexual orientation remains legal through the UK. And a recent TV report has captured disturbing footage of two UK churches claiming that God can “fix” gay people.

An ITV investigative report revealed that Journey UK and World Mission Agency – Winners Chapel International  (WMA-WCI) both advocate the idea that one can pray the gay away.

A man from Journey UK spoke to an undercover ITV reporter about how certain activities can help lessen one’s feelings of same-sex attraction. A pastor from WMA-WCI told the reporter that gay people are under Satan’s control and compared positive media depictions of gay people to Nazi propaganda.

The WMA-WCI pastor also said a 20-minute prayer over the reporter, even speaking in tongues, presumably attempting to “heal” him.

REVEALED: The church that claims God can 'fix' gay people. Winners Chapel tells our reporter:
– Satan is controlling parts of him
– God can change him
– Society's acceptance of gay people is like Nazi propaganda
– Prayer can help

First ever broadcast of conversion therapy in UK. pic.twitter.com/yKbFuWKS8Z

Both churches have denied the accusations, touting their inclusivity (regardless of sexual orientation) and promising internal investigations.

Both churches also operate as charities. But in light of ITV’s report, the UK’s Charity Commission overseeing regional charities, has begun investigating them to possibly revoke their charity status.

These two churches aren’t the only one practicing conversion therapy in the UK though. A Glasgow church belonging to Mountain of Fire and Miracles Ministries also promotes “ex-gay” therapy.

Mountain of Fire and Miracles Ministries made the news last year because of their Liverpool church’s three-day program to “cure” people of homosexuality. The program involves “relentless” prayer sessions lasting three hours each and absolute fasting with no water or food for 72 hours, a torturous and dangerous regimen.

In interviews with an ITV reporter, UK proponents of ex-gay therapy say that people should be able to “choose the lifestyle” they want to lead and not feel pressured to remain a certain way just because others tell them to.

However, every major American psychological association calls ex-gay therapy harmful and ineffective. An estimated 84% of people who’ve been through such programs say they’ve experienced lasting harm as a result.