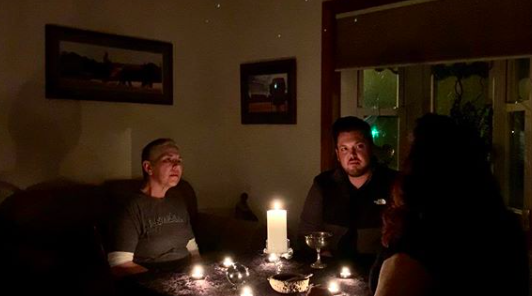 “As strange or unbelievable as it may sound, I’ve been this weird since I was a kid,” paranormal investigator Shane McClelland tells Queery. “I think many children are fascinated by monsters, mystery, and magic, and I was absolutely no exception. I suppose I just never grew out of it.”

McClelland is the co-host of the popular paranormal podcast The Q Files, along with Lori Gum. The show, which just launched its second season, takes listeners on bi-weekly supernatural adventures that explore the people, places, and phenomena outside of popular consciousness.

Prior to launching The Q Files, McClelland and Gum appeared together on the reality web series Queer Ghost Hunters. We had a chance to talk with him about all things supernatural, as well as what listeners can expect with Season 2 of The Q Files. Here’s what he had to say…

Sooooo, what’s it like to talk to a ghost anyway?

Honestly, it’s like talking to any person. There’s just extra steps. I wish I could say it was some profound experience, and while it is magical at times, it’s really pretty… normal.

Ghosts, or whatever it is that we manage to contact, have personalities just like us. Sometimes you can tell they don’t really want to engage in conversation. Other times they seem really excited that someone is noticing them and wanting to talk.

Part of what we try to do is create a safe space. Maybe that sounds goofy to some folks, but it seems to enable entities to be more comfortable and willing to engage. It’s led to us receiving information that we can later research and confirm. It’s also led to moments of physical contact, like a friend touching you in conversation. The big difference is that this friend feels like static electricity or spider webs.

Who is the most unique or memorable ghost you’ve communicated with?

Gosh, that’s tough! So many of the folks we manage to make contact with having really fascinating stories. That said, the most memorable is probably Madeline.

Madeline has a bit of history with us. We met her at a convent in Toledo when we were filming Queer Ghost Hunters. She was a nun there in her living life, but stayed around. We haven’t ever exactly pinpointed why (detailed communication like that is difficult), but we think it’s because she was able to live at least a somewhat authentic life at the convent. Or at least maybe had a bond with a particular friend at that location and stayed there with those memories.

But Madeline also unexpectedly traveled back with us to Columbus. We have audio of her at my co-host Lori’s house. We ended up asking her why, and if she maybe wanted to go back home. So Lori literally drove her home after a few days of visiting (arguably this may have been unnecessary but seemed like a nice gesture). Later, on Madeline’s 100 year death anniversary, we conducted a seance and chatted with her some more. By all accounts, she’s doing well and the full conversation can be heard in our episode “A Place To Hide.”

A Place To Hide: The Seance 🕯will be the new episode released tomorrow. Available wherever you listen 🎧. . . . . . . #BeWeirdStayCurious #Seance #Paranormal #GayPodcast #QueerPodcast #ParanormalPodcast #Podcast #NewPodcast

I would like to be a ghost some day, so I’m curious… Do ghosts actively choose to be ghosts, or is it something that happens to them?

So this is one of those great questions of the universe, right?

Truthfully, I don’t have a good answer. I think everyone, and potentially every thing, has the opportunity to reappear in our realm of existence. The mechanism that causes that is unknown. However, it’s my personal belief that we as individuals, or groups with a focused intent, can summon (for lack of a better word) spirits and these former energies.

If someone goes looking for you, after you die, they can find you. But being a ghost through your own decision seems possible. Perhaps you have a favorite place on earth, or somewhere with amazing personal memories, those things seem to enable spirits to remain. Tragedies are another common factor, but… I don’t think many folks want to actually experience that, and I don’t think many spirits want to remain because of that. There’s just something that keeps them from letting go from that memory or energy.

Is there any way for a ghost to not be a ghost anymore?

I don’t subscribe to the idea of “moving on.” It brings up too many religious connotations, and I think all religions are valid, so it’s unhelpful. I really believe ghosts can simply decide to stop appearing, stop haunting, and just go enjoy whatever existence exists after this life.

What is the most common misconception people have about ghosts?

That they’re something to fear. Lots of folks disagree with me on this, but ghosts are just people (not necessarily always in the literal sense). It’s like meeting a stranger on the street. Sure you may not know them, but if you’re polite and engaging, you’ll have a nice moment. Spirits have even recognized us from prior investigations at the same location, like you would an acquaintance or old friend.

A lot of times when we’re engaging with an entity, we get a sense of loneliness. People, well living people, don’t often believe in ghosts, and if they do, they don’t want anything to do with them out of fear. And since no one can truthfully explain the how or why of this phenomenon, these entities get left behind in a way.

We’ve even found that some extreme hauntings, where folks are legitimately afraid of the strange things happening in their home, are actually just a spirit trying to get their attention. Trying to get someone to acknowledge their existence. And I think many living folks can relate to that struggle.

Listen to the FULL trailer wherever you enjoy podcasts 🎧 It’s time to begin again. On season 2 of The Q Files Podcast, we’re going to fully embrace the notion that “not all those who wander are lost”. Join us on our queer adventures for astonishing stories about the paranormal & forgotten history. Be sure to subscribe. . . . . . . #podcasttrailer #BeWeirdStayCurious #Paranormal #GayPodcast #QueerPodcast #ParanormalPodcast #Podcast #NewPodcast #podcastersofinstagram

If you were a ghost, who or where would you haunt and why?

I don’t think I’d want to be a ghost, and if I was, I think I’d hate being confined to a specific location. Just the idea of being stuck in the same house for eternity sounds awful. So, I think I’d pick a forest. I’d be the ghost of a beautiful park or hiking trail. It’d also be neat to be the basis for some legend or folklore of a location.

What are some things audiences can look forward to in Season 2 of The Q Files?

Season 2 is going to have a focus on community. It’s something that 2020 has highlighted the need for. This pandemic has been exhausting on so many fronts, but I think the biggest is the inability to safely and freely spend time with the ones we love and hold dear.

There’s a lot of paranormal stories that center around the idea of community, but also very human stories. It’ll enable us to not just share some spooky tales, but really dive into the lives of folks who built community around things like UFOs and bigfoot.

This season will have a lot of the same feel, but different underlying context. We’ve said from the beginning that The Q Files is a personal, purposeful, paranormal show. It’s not what most folks are expecting.