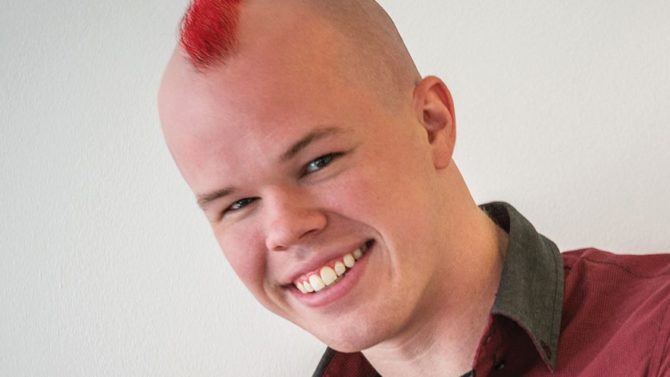 Samuel Brinton is a conversion therapy/torture survivor and LGBTQ rights activist. In a recent speech given at the Equality Federation’s 20th Annual Leadership Conference, he recalled the absolute horrors he was subjected to as a young teenager inside a gay conversion clinic.

Brinton was sent to the clinic by his mother, who was told that if she didn’t cure her son of the homosexual demons that possessed him, she may lose him forever.

Related: A Disturbing Undercover Look At How Conversion Therapy Tries To “Cure” Gayness

“My hands were bound, placed in ice and pictures of men touching other men, holding hands, were shown,” Brinton explained. “I was supposed to associate the cold I was feeling with the image that I was seeing.”

After that, came electricity.

But that was only the beginning of the nightmare. Brinton listed a slew of other torture methods the clinic used to turn young men straight, including “doctors” inducing nausea, vomiting, or paralysis while showing patients homoerotic images and forcing them to wear elastic wrist bands that would zap them whenever they got aroused.

“This was not actual science,” he said. “This was people trying to apply horrible, horrible pseudo-science to a child.”

He was also told AIDS was God’s punishment for gay people.

“To me, [that] was the most debilitating,” he recalled. “The one constant in my life was that God loved me and I loved others and if God didn’t love me anymore, how was I supposed to love others? How was I supposed to be a person who would make the world a better place?”

As all this was happening, Brinton’s mother would sit patiently in the clinic’s waiting room as her son was being tortured on the other side of the door.

“I do not understand how a mother hears her child screaming ‘Mommy, make it stop!’ and doesn’t run to the room,” Brinton said. “My mother truly, truly believed she was saving my life. There is no doubt in my mind that woman had been lied to. … And so she sat there and listened to the screams.”