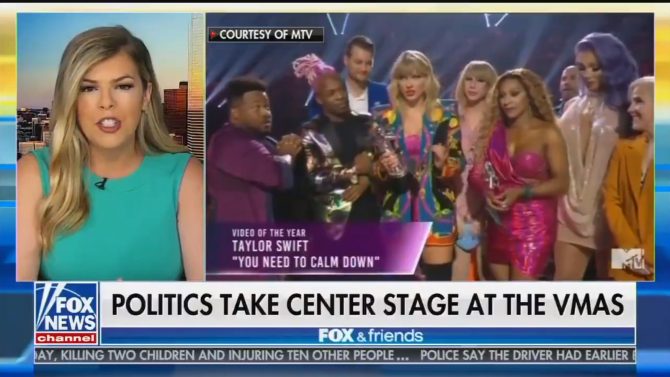 Swift picked up the Video of the Year award over the weekend at the MTV VMA’s. In her acceptance speech, she pushed the need for the Equality Act which would guarantee equal protections for LGBTQ people under the law. She also thanked her fans for supporting a petition with half a million signatures in support of the Act and needled the Trump Administration for its inaction.

That was just enough to set off Fox & Friends.

Commentator Allie Beth Stuckey had this to say:

“People like her, well, actually, people especially like Taylor Swift, the beauty of them, the charm of them, is that they were politically neutral, at least that’s true for Taylor Swift. And now she’s kind of waded into these political waters, and it doesn’t seem like they really know what they’re talking about, and they’re not convincing anyone in the middle of the country, or anyone who disagrees with them because they don’t actually have any kind of a viable argument.”

Stuckey also inexplicably attacked Swift for not going into the particulars of the act during her speech. ““They like to get up there and, of course, use the buzz-phrase that we use a lot, ‘virtue signal,’ without too much substance to their argument,” she said. She then went on to criticize actress Allison Brie of the TV series Glow for comments about immigration.

Fox guest attacks Alison Brie and Taylor Swift: "The beauty of them, the charm of them, is that they were politically neutral. … Now she's waded into these political waters and it doesn't seem like they really know what they're talking about." pic.twitter.com/sAofQ3c8Pt