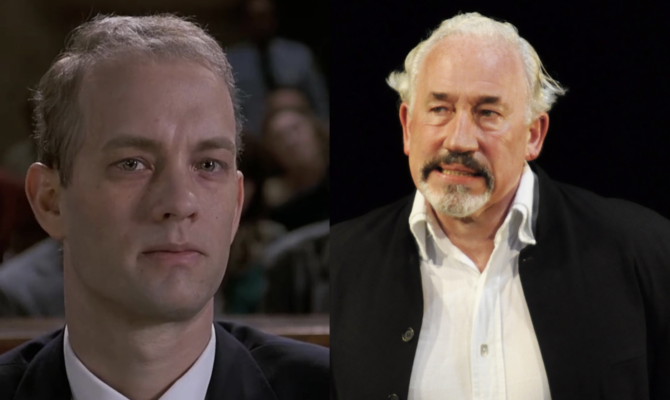 Actor Simon Callow has weighed in on the “should straight actors take gay roles” debate after Tom Hanks recently said he could not as a straight man today play his 1993 role in the movie Philadelphia.

Callow, who is gay and has appeared in films like Four Weddings and a Funeral and Amadeus, called it a “dangerous idea” that only out-gay actors should take gay parts.

Hanks won an Oscar for his work in Philadelphia as lawyer Andrew Beckett, who hides his sexuality and HIV status from colleagues before suing his former employers for firing him. Earlier this month, he said he felt the world has moved “beyond that now” and “wouldn’t accept the inauthenticity of a straight guy playing a gay guy.”

In an interview on GB News on Tuesday, the 73-year-old actor countered: “Think of all the wonderful performances of people who are not gay have given: John Hurt, Daniel Day Lewis, Jake Gyllenhaal and Heath Ledger in Brokeback Mountain.

“I mean, these are all as far as I know, heterosexual actors who’ve given utterly convincing credible and illuminating performances.”

He added: “Though I’m gay, it doesn’t qualify me to play all the many different kinds of gay people that there are. It’s a very simple idea and a dangerous idea that you can only play someone who you actually are.

“So although I think Tom Hanks’ heart is clearly in the right place, I think it’s a terribly important thing that we stress, but actors are about imagination, about creating characters.”

Later in the interview, he said the idea that “only people who are something should act them” is not an “enlightened” view.

“It’s a limiting thing. It kills the imagination, it kills the liberation that you feel as an actor when you play somebody else.

“So, I think Tom Hanks is a very kind and gentle and thoughtful man who was trying to ally himself with a sympathetic idea, but it’s a dangerous one, in my view.”

Hanks previously told the New York Times: “Let’s address ‘could a straight man do what I did in Philadelphia now?’ No, and rightly so.

“The whole point of Philadelphia was don’t be afraid. One of the reasons people weren’t afraid on that movie is that I was playing a gay man.”

He added: “It’s not a crime, it’s not boohoo, that someone would say we are going to demand more of a movie in the modern realm of authenticity.”