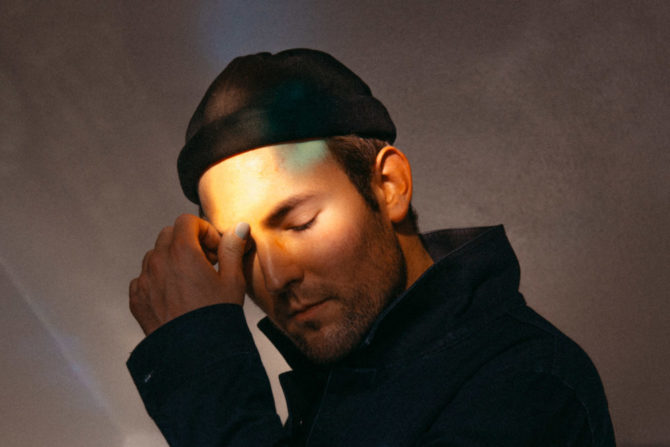 Morgan Karr—a.k.a. Morgxn—believes that everyone should, at some point in their life, sell everything they own, pull up stakes and move to an unfamiliar city—just as he did a few years ago. Leaving behind a promising career on Broadway (he was an understudy in the original Broadway cast of Spring Awakening), he headed westward to take a chance on writing and recording his own songs in L.A.

“That opened up a lot for me in terms of who I am and what I want,” Karr tells Queerty in an exclusive interview. “I didn’t really know how to get my music going [in New York]. So, I thought, What if I move to L.A.? I packed two suitcases and bought a one-way ticket.”

It seems like that gamble may have paid off. With the release this week of his debut album vital today, the 31-year-old singer might just be on the cusp of pop stardom—though he resists being labeled a “pop star” just yet. But over the past year or so Morgxn has steadily released a collection of glossy, heartfelt tracks accompanied by high-concept, cinematic videos. His moody, resonant banger “Home” has been featured in TV spots for HBO, ABC and Showtime. His work, while undeniably catchy, digs deep into issues of identity, belonging, the search for one’s place in the world.

The anthemic “Carry the Weight” was inspired by an incident at the 2017 Women’s March in New York, when a man—marching in the opposite direction, according to Morgxn—called him a faggot.

“I chew on questions more than I look for answers,” Karr says. “I think music comes from that space of questioning and searching within yourself and trying to parse the pieces of you that don’t quite make sense.” The songs on the second half of vital, the ones that haven’t been released as singles, represent a whole other side of the singer.

“My goal for the next year is to share this music with as many people as I possibly can,” he says. On a Tuesday evening earlier this month, that meant playing a small private show for a crowd of journalists and music industry insiders at New York’s infamous Lower East Side nightclub The Box. Upstairs in a dimly lit alcove, Morgxn wasn’t exactly sure what to make of this kind of show. He still approaches interviews as opportunities to chat about the music he’s putting out into the world, the perspective behind it, the experiences that shaped it. But, unsurprisingly, he prefers the sort of show he played on his recent European tour, where the crowds often knew the words to his songs and sang along.

He hasn’t quite had those experiences with stateside audiences, but he knows his work is connecting with people here. A long-time diarist, Karr creates journals that he takes with him on tour, allowing fans to write messages in them. In one, someone wrote a missive that epitomizes the impact he hopes to make. “A guy wrote ‘Gay and fierce because of you,’” Karr says. “For a Southern kid who could not express himself in that way growing up—to have someone say that to me means a lot.”

Growing up in Nashville, Tenn., Karr gravitated toward musical theater, playing piano from a young age and occasionally singing backup for gospel acts. “My family encouraged me to sing, I think mostly to get me out of the house,” he says.

But even in the country music capital of the world, he craved a model for a more sensitive, open kind of masculinity that was entirely absent in his life. “The men that I knew in my world did not show emotion,” Karr recalls. “I don’t think I ever saw my father cry.”

Morgxn’s latest single, “Me Without You,” deals specifically with his father’s sudden death, an unexpected loss that radically reshaped vital. “He was a complicated man and our relationship was complicated,” says Karr. “Being a boy in the South, you look up to your father, and with him gone it was like, What does it even mean to be a man?”

Karr put a planned four-song E.P. on hold, taking time to grieve as well as to expand and rethink the album that would become his debut. The resulting work felt like the beginning of a new chapter in his life and career, the culmination of a process set into motion when he left New York for L.A. Which brings us to the X in his name, as well as in the name of his label, wxnderlost records. “I think the X for me was like there’s a period of my life that’s ending and a period of my life that’s beginning. But they intersect at me,” he explains. “I wasn’t putting on a persona. I was marking a period in my life that was over and starting a new one.”

That new phase continues with a string of concerts next month, and some high-profile festival dates this summer, including Lollapalooza in August. And the momentum shows no sign of slowing. As he prepared to go on stage at The Box, a friend approached Morgxn with the news that Sirius XM’s Alt Nation had just added “Carry the Weight” to its rotation.

Karr beamed. Earlier, he’d been asked what it felt like to be this close to everything he’d worked so hard for. “This is what it feels like,” he said. “This moment.”