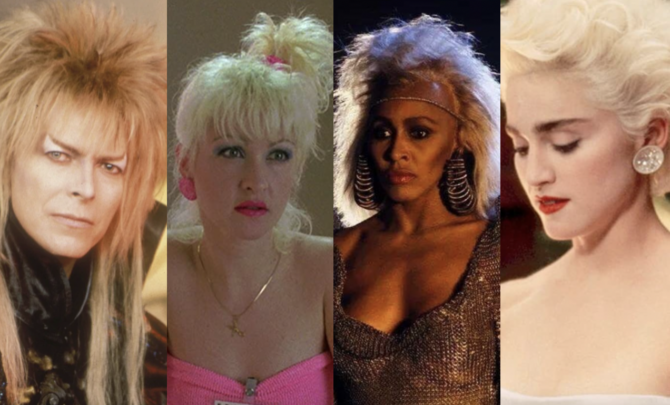 Ah, the ’80s. It was a decade of great music, wild fashion, terrible politics, and some of the worst movies starring gay pop icons ever made. Just about every major singer of the era appeared in at least one bad major motion picture, usually a comedy. Most of them flopped, but many have since gone on to develop cult followings.

Madonna starred in this 1987 screwball comedy about a street-smart girl from Philadelphia who goes to jail after being falsely accused of murdering her boyfriend. Upon her release, she meets with a guy and convinces him to help track down the real killer. Chaos ensues and, of course, they fall in love. The movie tanked, but its accompanying soundtrack, which featured four new songs by Madonna, sold over six million copies worldwide. The title track became her sixth number one single on the US Billboard Hot 100 record chart and served as the inspiration for her 1987 Who’s That Girl World Tour. Stream it on Amazon.

Olivia Newton-John and John Travolta failed to rekindle the flame they ignited in Grease when they reunited in this 1983 fantasy rom com about a cash-strapped inventor (Travola) who tries to rob a bank teller (Newton-John). The two must learn how to show compassion for one another in order to delay God’s judgment upon Earth. The film was both a critical and commercial disaster. Its soundtrack, however, was spawned five singles, including Newton-John’s hit “Twist of Fate”, which became the 42nd most popular single of 1984.

Tina Turner tried her hand at acting in this 1985 dystopian film and sequel to Mad Max 2. In it, she plays Aunty Entity, a ruthless dictator who exiles Max to the desert, where he teams up with a band of feral orphans. The film was a moderate success, but it was the soundtrack that made the most lasting impression. It featured Turner’s song “We Don’t Need Another Hero”, which peaked at #2 in the U.S., nabbed both a Golden Globe and a Grammy nomination, and was later included on her 2004 greatest hits album. Watch it on Apple TV.

Cyndi Lauper appeared along geeky dreamboat Jeff Goldbloom in this 1988 fiasco. She plays a psychic named Sylvia, who goes with her friend Nick on a pilgrimage to the Ecuadorian Andes to find the source of mystic energy. The movie cost $18 million to produce and earned less than $2 million in ticket sales, along with terrible reviews. Lauper recorded the song “Hole in My Heart (All the Way to China)” for the film but, for whatever reason, it wasn’t included on the official soundtrack. See it on Vudu.

Lorna Luft followed up her performance in 1982’s Grease 2 by co-starring in this remake of the 1960 film about a group of ditzy college girls who travel down to Florida for spring break. It bombed at the box office and was panned by critics for being “dumb, vulgar and mostly humorless.” Luft tried to salvage things by releasing a disco version of the song “Where the Boys Are” concurrently with the film, although it wasn’t included on the soundtrack. Unfortunately, not even guest vocals by the Village People could save the doomed project. Stream it on Amazon.

David Bowie and his shag wig starred as the Goblin King in this 1986 musical fantasy directed by the great Jim Henson. The film grossed $13 million upon its release, earning back barely half of its $25 million budget, and was considered a disappointment; however, it has since been re-evaluated by critics and found a new, more enthusiastic audience. Bowie recorded five songs for the soundtrack, including his classics “As The World Falls Down” and “Magic Dance”. Watch it on Hulu.