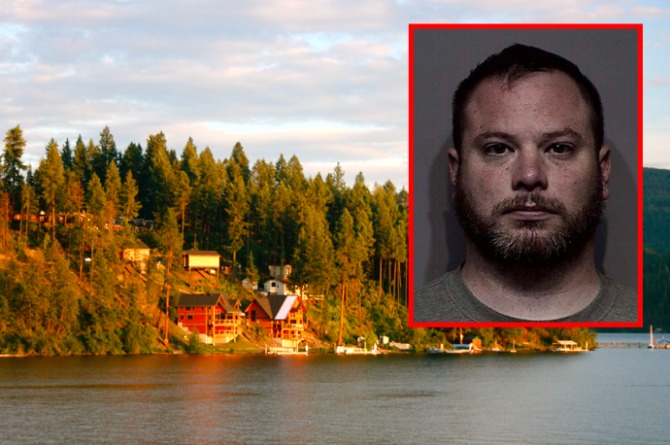 The college community in the sleepy rural town of Coeur d’Alene, Idaho (pop. 50,285) has been rocked by a gay spycam scandal.

35-year-old Jonathan Downing teaches chemistry at North Idaho College. Earlier this week, he was arrested after being caught secretly videotaping his roommate and the man’s girlfriend in the bathroom.

Coeur d’Alene police said the alleged male victim, a 20-year-old former student of Downing’s, found a pinhole video camera in a wall after becoming suspicious that he was being video recorded. On a computer that both men shared, the alleged victim, “found secretly recorded videos of him and a female friend,” Det. Jared Reneau said.

The alleged victim called police after discovering the files.

Downing, who identifies as gay, admitted to making the recordings but told investigators he was only interested in seeing his roommate naked; the girlfriend has been recorded “inadvertently”.

“Downing admitted he intentionally placed the camera to covertly record video of the male victim while the male was in the bathroom,” Reneau said in a press release.

The alleged victim, who has known Downing since he was 15, told investigators that over the years he would often “would slap (him) on the buttock,” and tell him, “just wait until you are 18.”

In addition to teaching chemistry, Downing is also an adviser for North Idaho College’s Gender and Sexuality Alliance, a student group promoting “a positive and supportive environment for gay, lesbian, bisexual, transgender, queer, intersex questioning and straight people as well as those who support them.”

On Thursday, the group posted a note to its official Facebook page addressing the scandal.

“Many people have been personally affected by the news that broke this morning regarding Jon Downing,” the post reads. “Please do not hesitate to contact NIC’s Crisis Response Unit or the ASNIC office for support or with questions.”

Meanwhile, the college issued a statement saying Downing was suspended from his job pending the outcome of the police investigation.