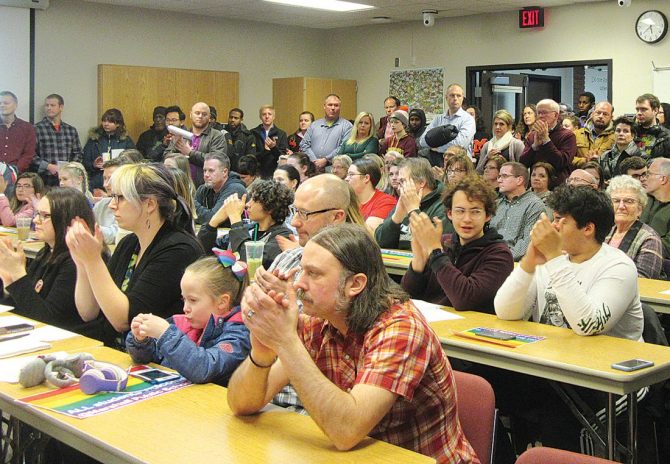 Residents of Marshall, Minnesota (population 13,680) gathered this week to voice their extreme outrage over a rainbow flag that recently appeared in the cafeteria of a public school.

During the tense community gathering, which was actually the second meeting held about this issue, many quoted from scripture, claiming that being LGBTQ was “against God’s preordained purposes and order” and fearing the rainbow flag would “confuse” or demoralize students who feel the same way.

“What’s next?” parent Mohammed Ahmed asked. “Curriculum? Teaching this lifestyle in our classrooms?! … As parents, we have the right to educate our own children about sexuality!”

For the record: Nobody is proposing “teaching” homosexuality in the school. It’s literally just a flag hanging in the cafeteria.

Another man got up and falsely stated the “lifespan of a homosexual” was approximately 42 years. And another inaccurately claimed homosexuality was a “belief” system and nothing more.

Bill Mohrman, an attorney representing some of the homophobic naysayers, threatened that a lawsuit against the school may be imminent unless the school establishes a “neutral policy” on “viewpoints.”

Because suing a financially strapped school in a town where the median household income is less than $50,000 over a rainbow flag in the lunchroom is a great thing to do for their own children’s educations.

Marshall High School GSA advisor and teacher Karrie Alberts was one of those who actually spoke in favor of the flag, telling the assembly to quit treating LGBTQ kids as though they are “controversial.”

“I want them to know they are OK, they are supported,” Alberts said. “Quit equating their identity to something controversial.”

In 2016, Donald Trump won the county where Marshall is located with roughly 60 percent of the vote.