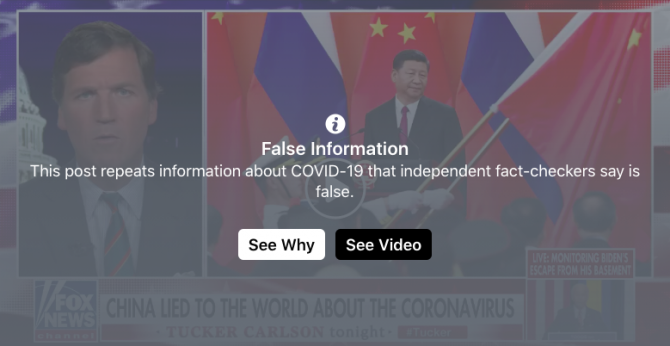 The homophobic Fox News anchor was slapped with a “False Information” label on social media after one of his guests peddled a disproven coronavirus conspiracy theory on his program this week.

On Tuesday, Carlson had Dr. Li-Meng Yan on his primetime show. During the interview, Yan falsely claimed COVID-19 was developed in a Chinese lab and intentionally released into the world by the Chinese government.

This conspiracy theory is absolutely not true.

After the interview was uploaded to social media, Facebook and Instagram attached a fact-check warning to the clip. This sent Tucker into an outrage.

The admitted gay basher spent the first 20 minutes of his hour-long show last night whining about the whole thing in a segment titled “The End of Free Speech.”

“Facebook suppressed the video, presumably on behalf of the Chinese government,” he griped, providing zero evidence to support his claim.

“Facebook executives have made it harder for users to watch our segment. Those who found the video had to navigate a warning the interview ‘repeats information about COVID-19 that independent fact checkers say is false.’ Instagram, which Facebook also owns, did the same thing.”

Because, as we previously stated, the information was not true.

Carlson continued, “Twitter suspended Dr. Yang’s account entirely. It did not explain why. Nor do the tech companies explain how they would know more about disease transmission than an MD PhD virologist like Dr Li-Meng Yan. Instead, Facebook and Instagram linked to three so-called fact checks that supposedly proved Yang was lying.”

The three fact checks can read here, here, and here.

Then, without any hint of irony, Carlson, who hates having to pronounce Kamala Harris’ name correctly, went on say we need “more informed voices in the conversation” when talking about COVID-19.