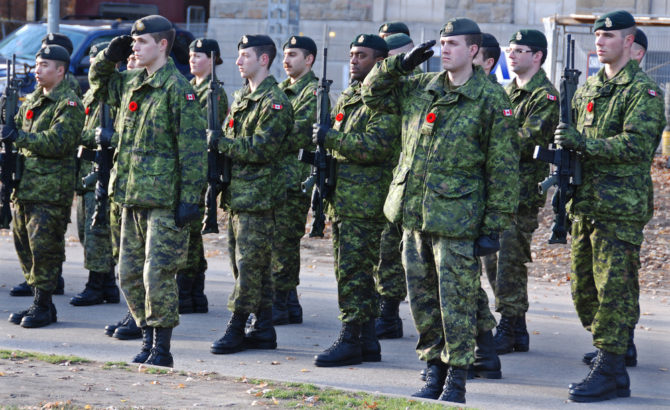 A dramatic court martial is currently underway at a Canadian Forces base in Manitoba for a soldier who has been accused of sexually assaulting another male soldier.

The alleged assault happened back in 2014 when the two corporals were training at a base in Wainwright, Alberta along with a platoon of 24 others soldiers. The alleged incident happened in the evening on the final day of training.

According to testimony, the victim, who does not identify as gay, was forcibly penetrated though his clothing and called a homophobic slur while he was mopping the floor.

He testified in court that he felt “a sharp, penetrating pain” and was “in shock” as he watched his attacker casually walk away. Afterwards, he found a two-inch-long tear in his underwear.

He also suffered physical injuries. For a year afterwards he says he would find liquid fecal matter inside his underwear and have to wipe away blood.

He did not seek medical attention or didn’t tell anyone about the attack until about a year and a half later, in the summer of 2016.

“I felt it would be too awkward,” he testified.

The defense tried downplaying the assault, saying that soldiers often horsed around with each other, including slapping each other’s butts, calling each other homophobic slurs, and partaking in “tickle parties.”

When the alleged attacker took the stand, he admitted to engaging in horseplay that included tickling, pants-pulling, and putting Rub A535 heating cream up his butt.

He also admitted to spanking the victim.

“It wasn’t meant to be malicious,” he said. “It was done in a light spirit.”

Another soldier testified that the behavior was just how the soldiers let off steam.

“Everybody seemed to take it quite well,” he testified.

As for the use gay slurs, he added, “it wasn’t derogatory or anything.”