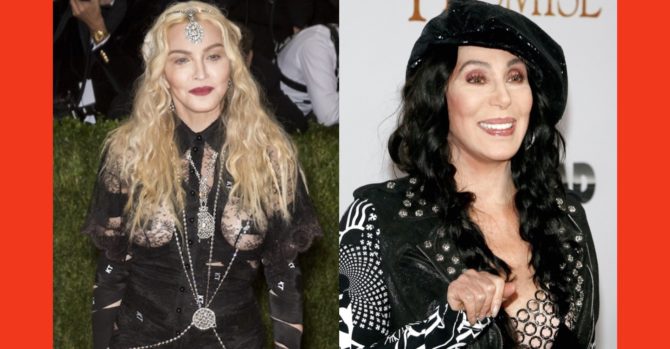 Cher just released the first track — “Gimme! Gimme! Gimme!” — from her upcoming album Dancing Queen, a compilation of Abba covers. Madonna famously sampled that same song in her original tune “Hung Up” back in 2006, from her album Confessions on a Dance Floor.

DJ Alex Simpson mashed the two together, and in the process created the gay mega-hit we never knew we needed.

Cher will be releasing Dancing Queen, a new album of all Abba hits on September 28, officially announced yesterday by Warner Bros. Records.

“I’ve always liked Abba and saw the original Mamma Mia musical on Broadway three times,” Cher said in a statement sent to Queerty. “After filming Mamma Mia! Here We Go Again, I was reminded again of what great and timeless songs they wrote and started thinking ‘why not do an album of their music?’ The songs were harder to sing than I imagined but I’m so happy with how the music came out. I’m really excited for people to hear it. It’s a perfect time.”

Dancing Queen was recorded and produced in London and Los Angeles with Cher’s longtime collaborator Mark Taylor, who previously produced Cher’s global smash “Believe” which was number one in over 50 countries.

Cher is scheduled to be awarded a Kennedy Center Honor on December 2nd in Washington D.C. She is a co-producer of The Cher Show, the upcoming Broadway musical opening on December 3rd in New York City, and will be touring Australia and New Zealand in September. She also currently performing a residency at MGM Resorts.

Here are the 10 tracks from Cher’s upcoming album Dancing Queen: