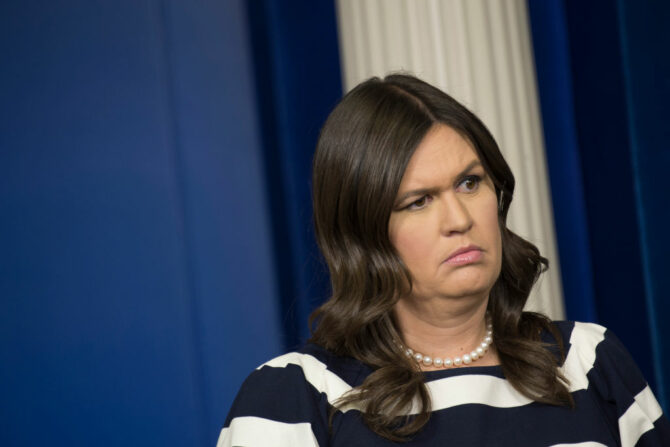 If it feels like Sarah Huckabee Sanders has been running for governor in Arkansas forever, it’s because she has. Sanders first announced her candidacy in January 2021, one year and 10 months before the election was scheduled to take place. But looking at her campaign website, you might think she’s already got the job, even though the election is still several months away.

When most candidates run for public office, they indicate that they are, indeed, running for public office. But not Sanders. Her campaign signs and swag seem to imply that she already holds the highest office in her state by conveniently leaving out the word “for” and strategically placing the word “governor” in a box around her name.

On top of that, Sanders, who regularly lied for Donald Trump when she served as White House press secretary, appears to be scaling back on promoting her own candidacy to instead focus on endorsing GOP candidates in other races, like extreme right-wing Arkansas state Rep. Breanne Davis, or vehemently anti-LGBTQ U.S. Rep. French Hill, both of whom are running for re-election.

Clearly, the lady thinks she’s got this thing in the bag. And she might. Sanders raked in a ton of cash over the last year. $13 million, to be exact–a record for a governor’s race in Arkansas. Just last month, she pulled in an impressive $235,000, outpacing her closest fundraising rival among the five Democrats hoping to challenge her.

Of course, it helps that, for over a year now, she’s been the only GOP candidate running in her field, and that she’s been endorsed by virtually every Arkansas Republican elected official at the state and national level. Although, that just changed.

He also posted about his candidacy on Facebook this week, writing, “I’m running for Governor! The response has been overwhelming! Thank you!”

That said, Washburn has a lot of ground to make up if he wants to compete against Sanders. And, if we’re being realistic, he probably doesn’t have a much of a chance. His campaign website isn’t even set up to accept donations yet. But perhaps his candidacy, at the very least, will get Sanders to realize that she’s still running for governor and that she doesn’t actually have the job yet.

While you’re here, watch Sanders get destroyed by Australian ABC TV anchor Leigh Sales while she was promoting her crappy book “Speaking for Myself” last year.