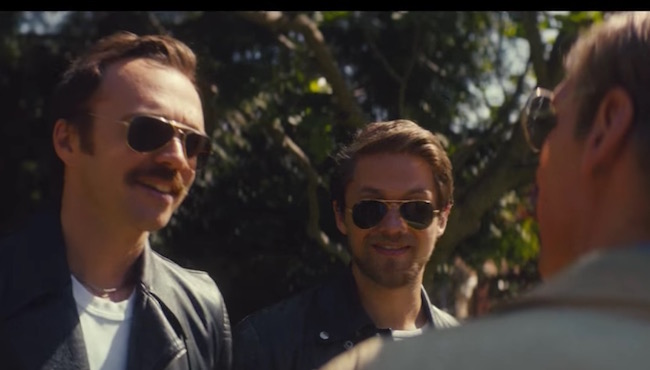 The work of Touko Laaksonen — otherwise known as Tom of Finland — is the very definition of iconic: Instantly recognizable, his artwork happily explores cartoonish, hyper-masculine men in all sorts of ribald tableaux; canoodling in and out of leather get-ups, sailor suits, and hot pants.

After a stint serving in World War II, Touko returned to Finland in an age when homosexuality was still illegal. While working at an ad firm, he began sketching his trademark musclemen under the pseudonym Tom of Finland.

Related: A Sensuous First Look At ‘Tom Of Finland: The Movie’

Finnish director Dome Karukosi recently adapted Laaksonen’s life into a must-see film that chronicles the artist’s development, showing just how he helped bolster the burgeoning gay movement in the mid-20th century. Much of the movie shows how his work came to reach larger audiences, taking the artist to Berlin and Los Angeles.

Courtesy of Gay Times, a clip taken from the film — which you can watch below — re-imagines one of Touko’s notorious pool parties, often wall-to-wall with the beefy models that inspired much of his art.

Related: This is not a Tom of Finland illustration. It’s two men covered in body paint. Can you even?

If you missed the film, it’ll be available as a Limited Edition Dual Play (Blu-ray and DVD package) on November 20th, and include interviews and deleted scenes.

“I’ve heard countless stories of men telling how they felt when they first saw Tom’s drawings and how that changed their lives,” director Dome Karukosi tells Gay Times.

“Many said they left their previous lives to start afresh, often in LA or San Francisco. I can only imagine the self-empowering moment and the strength the drawings must have given to these men.

We’ve tried to bring this into the film, with the help of people who actually changed their lives because of Tom. The Tom of Finland Foundation has been a great help when trying to access these stories.

I’m always happy to see art that provokes. In Tom’s case, it demonstrates the power of his imagery.

I honestly don’t think that the stamps themselves are ‘too dirty’. Underwear ads or soda commercials can be dirtier.

These complaints are really more because a gay person is getting his own stamp, which shakes the minds of the conservatives.”

Watch below, and just try not to get distracted: