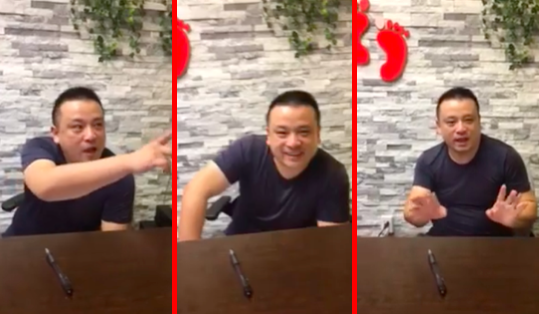 All Michael Garcia and his boyfriend Armando wanted was to have a nice relaxing couple’s massage at Joy Feet Spa in Naples, Florida.

But when spa manager Jerry Liu learned they were a gay couple, he turned them away, even though they had already paid for the massage online.

Speaking to NBC2, Garcia explains: “I was like, ‘Why?’ He was like, ‘Cause it’s female and male,’ and he just kept pointing to a poster on the wall for couples massages.”

But don’t just take his word for it. There’s video of the interaction.

He chocked it up to a cultural difference. In China, he claims, the word “couple” means a man and a woman, but he says he now understands being a couple isn’t limited to just opposite-sex partners.

“It doesn’t matter where he’s from,” Garcia says. “He’s here in America. He should know that that’s a thing. It’s normal. Treat everybody equally—black, white, gay, straight—it doesn’t matter. We’re human. We all came from the same thing.”